Saturday peaked way too soon. About 2:42pm to be precise.

Oxford City played an absolute 100% belter of a song. A song from a golden era of music (the 90's) a song that stands alone in it's genius; a song that revolutionised music, a song from one of the greatest stars to rap on stage at Top of the Pops. Got it? What if I say he had the initials MJ? Yep, obvious isn't. Montell Jordan and his 1995 Number 11 work of genius "This Is How We Do It". I loved that song. I still do. It's like Montell was rapping about my life as a 14 year battling to survive on the mean streets of west Weymouth:

This is how we do it, all hands are in the air
And wave them from here to there
If you're an O.G. mack or a wanna-be player
You see the hood's been good to me
Ever since I was a lower-case G
But now I'm a big G. The girls see I got the money
A hundred-dollar bills y'all

I had a pretty lucrative paper round yo. 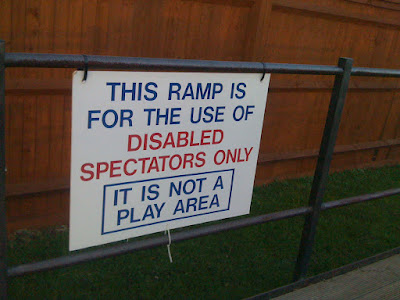 Shame. I was hoping to use this sweet jump to get like three feet of air. Gosh!

Sadly they only played half the song. A crime. Mark Morrison's 'Return of the Mac' was also brutally handcuffed and taken off to the playlist cells before Mark could let us know that he's back to to run the show as City sought to play snippets of their entire tape collection before kick off. 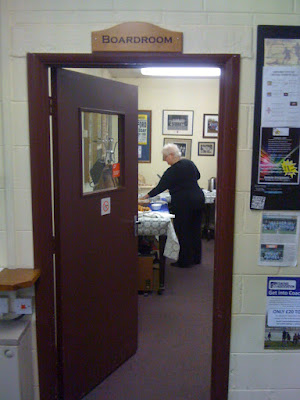 She's got that vibe.

When Montell was urging us all to tip our cups and throw our hands up Weymouth were busy bumbling around the Beazer Home Southern League, while our pesky cousin marrying, Fudd drinking neighbours from Shelbyville Dorchester were lording it in the league above. Once again they above us in the tinpot pyramid and our squad for this match was missing one of our better players, Sam Malsom, who, along with Stephen Reed, looks likely to head over the hill. They may have spent the week trying to harm our football team but we had the last laugh after a daring raid on Friday, by a bunch of civic pride emboldened Weymouth fans, recaptured our towns precious lemon tree from a car impound in down town Dorchester.

Oxford City are doing their bit to reduce the unemployment numbers in the local community. The programme lists a total of 60 jobs at the club, which works out at 1 job for every 3 songs partly played before kick off. For those wondering the Rev. Hedley Feast is the superbly named current Club Chaplain. 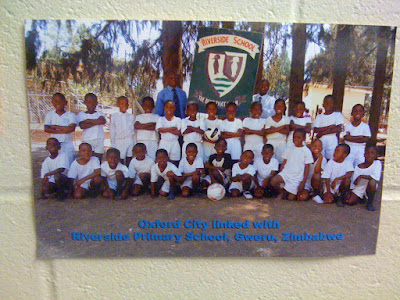 No space on the club house walls are left uncovered. All of the above jobs have their own collage. There's about 8 posters for the 'Welfare Officer', a huge mirror, an Oxford City darts board (presumably managed by the Chief Pub Sports Liaison Officer), details of the next fixture of the Veterans team, a table football ehh...table and a poster showing the British Sign Language alphabet. 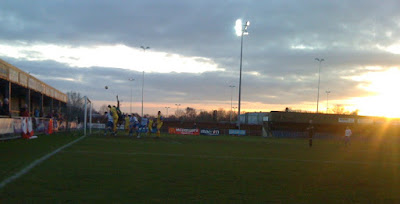 It's alright, I get it. The club have a hige number of volunteers and are playing a role in the community and, yes, once again I am more than a little bit jealous of this. *doffs 'I heart punting' baseball hat* In fact I'm so impressed I'm tempted for a trip to their upcoming 80's/90's music night. Obviously I'll don ear plugs for the 80's guff but I have to admit I'm looking forward to bogling to Aswad. 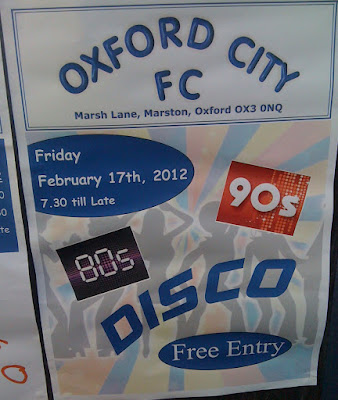 Have you got anything by Apache Indian? China Black then? Ini Kamoze surely?

In the first half a helicopter landed on a building nearby.

Half time my homies from the hood decided to be good, community supporting, patrons and trying the local ale. Don't. Don't be community spirited. It tasted like stale Sarsons vinegar. ("this is how we brew it" anyone?) 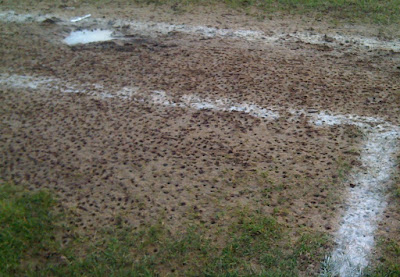 Amongst us a home fan, with the apparent job title of "Official Oxford City branded Jimmy Saville impersonator", wandered in between the covered walls. The old boy looked resplendent in a monogrammed Oxford City tracksuit, Oxford City baseball cap - complete with long hair creeping out from underneath -, blue sunglasses, ear rings, white headphones and some extravagant bling. Now then, now then if Weymouth are ever EVER going to have some positive recognition in the town I propose that a weeping, apologetic George RoLoLs is paraded along the Esplanade, sat in a rusty wheelbarrow, dressed as a destitute Jimmy Saville while fans pelt him with lukewarm Bovril and sharpened lemons. 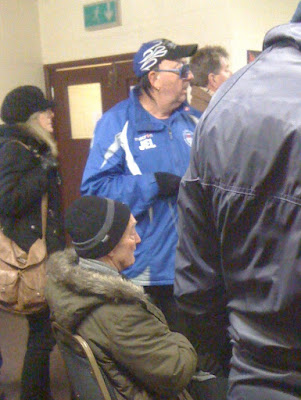 The next stop is the east side motel.

A powerful look sir, I salute you.

As the ref blows his whistle for the second half the ladies of Oxford City retake their seats beneath the dirty bar window to warmly watch proceedings. Meanwhile I staggered round in the cold looking for an alkaline based drink to combat increasingly loud tummy shames.

The only numbers that ever matter in football are those in the final scoreline (#profound) and this one resulted in a 2-0 defeat, although after a 6-0 and a 4-0 defeat this has to be considered progress. Through the use of this concave graph I am delighted to show that mathematical science shows we will secure a 0-0 inflection (away) point against Stourbridge before going on a fantastic winning run and I very much look forward to our 8-0 win over Banbury next month. 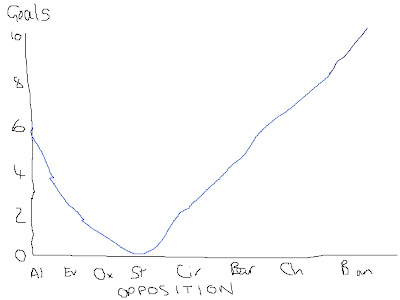 The number that is generating the most interest in Weymouth at the moment is rumoured to be the £40,000 that George RoLoLs is rumoured to be asking for all but 9% ownership of the club. Fans of Kettering Town be afraid, he's heading your way, but hopefully we'll see the RoLoLs family heading over the hill to Shelbyville and onwards towards North Haverbrook shortly.