It's not Ober yet.


The first day of the season, the smell of freshly cut grass, the scent of pre season infused optimism in the air and most of all, the horrific smell of freshly dumped horse shit around the ground.

You always want your team to start the season by spanking some relegation fodder. You don't want a massive derby match against your hated rivals, where the whole town comes to watch, where the police turn out in force and feel the need to bring their previously severely constipated equine section who have suddenly got pre match nerves and have violently defecated in the middle of the main route to the ground. Rot Weiss Oberhausen got all three of these things. 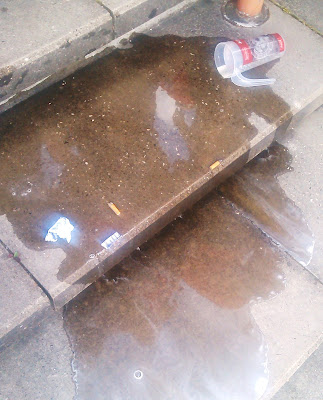 Tragic scenes at Oberhausen. Not a drop survived. Makes you think how lucky you are really...

Kick off is delayed for 15 minutes and this time is used in a number of ways. A new CD of terrible German soft rock hits is placed on the stereo, more non alcoholic beers are reluctantly purchased and the Essen players whip their 6,000 (ish) fans into new levels of pre match frenzy. Meanwhile Oberhausen's Capo tries to get the fans going by shouting into a megaphone with the amplification quality of a banana peel filled with a slipper. He fails badly and then wobbles off the fence. 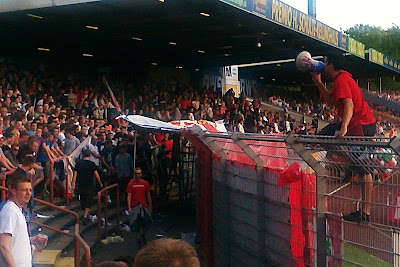 On the pitch one of the most tinpot things I have ever seen takes place. Small children, dressed as representatives from each of the 20 clubs in the new Regionalliga West, are introduced to the nonplussed crowd and made to run from the touchline to the centre circle all the while being vociferously harangued by 13,000 football fans. “Ladies and Gentlemen it’s FC Schalke 04 II”, “next little Fritz represents Fortuna Köln” “Booo, Booo!!!!”, “Rot Weiss Essen everybody”, “Scheiss RWE, Schiess RWE” etc. An experience I'm sure they will never look back on fondly and never tell the Grandkids in the future.

The teams are out and the Oberhausen Ultras, the hygienically named “Handtuch Mafia (Towel Mafia)  have prepared an impressive display of flag waving, Argentina 1978 style paper throwing and a tifo with the slogan “ My heart beats with an inferno when I think of RWO” Might want to see a cardiologist about that then chaps. 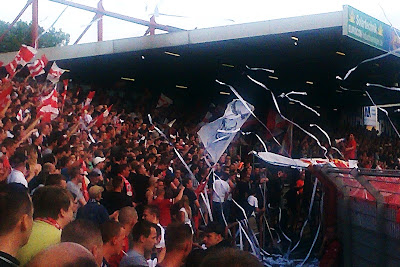 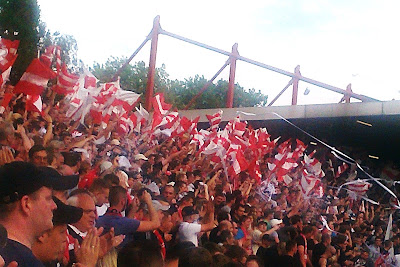 Essen fans clamber onto the roof of the bratwurst hut to find space and are singing “Scheiss RWO” and we're all ready to kick off the season. But no. First we need a speech from some droid from the Regionalliga about how he is convinced the new league structure is correct, how there will be some great games and how the focus should be on fairplay and good sportsmanship. When he finally, thankfully, pipes the chuff down we can all get back to chanting “Scheiss RWE/O” (delete as appropriate) and show we paid no attention to his plea for good sportsmanship.

Oberhausen are managed by ex Bayern Munich winger/nutjob Mario Basler. Basler is a fully paid up member of the “Good Player/Shit Manager” club (which recently awarded honorary lifetime memberships to Bryan Robson, John Barnes and Tony Adams) and currently looks like an anguished walnut. He's had four managerial jobs, been sacked from them all and got Oberhausen relegated last year. This summer he’s been a busy Basler signing 20 (twenty) new players as well as writing a blog for budget supermarket Netto. 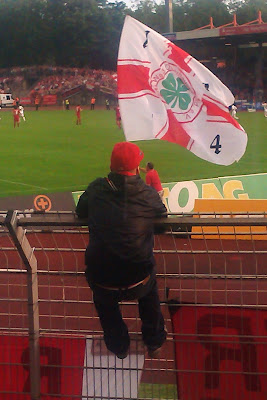 After 35 minutes Basler's boys are one down. The Oberhausen fans are hacked off, “Wir machen das Spiel, Sie machen die Tore. Wie immer.” (We make the play, they score the goals. Like always) The pre-season optimism has drifted away before the smell of horse shit.

The RW Essen fans however are having a great time. Each third of the terrace takes it in turn to shout part of the team name, which is quite impressive. What's not impressive is the deployment of a Mexican wave. Seriously. Stop that. The Oberhausen terraces fall silent. It starts to rain. A young girl quietly plays with a hoola hoop. 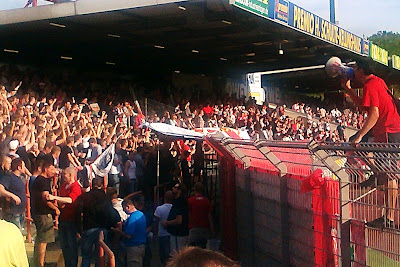 The Capo during more responsive times.

In the second half Oberhausen deservedly equalise through a tremendous volley from Schneider on 55 minutes and take the lead when Jörn Nowak nods in a goal on 66. There's some classic grown men jumping on fences celebrations going on, but before they’ve clambered down RWE have equalised. Being on a fence then just looks foolish. 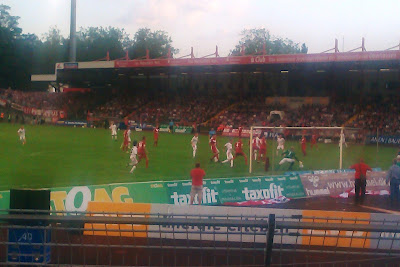 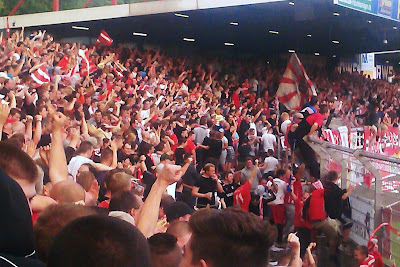 A blurry shot of the celebrations.

Oberhausen have two great chances to win the game, both falling to Karoj Sindi but he blows them both. With the Towel Mafia (Arf) busy unfurling a banner saying “What’s worse than the rats from RWE, only the hypocrites from DFB” RWE take the lead. The banner is soon in tatters. 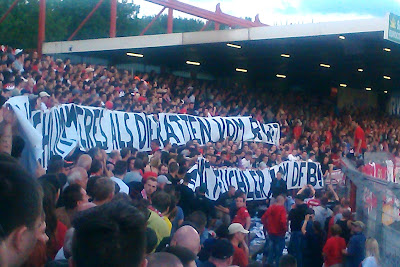 Soon after the stadium fills with the sickening sound of away fans celebrating a goal that confirms a derby day defeat. Marvin Ellmann scores and Basler’s not happy. So he tries to start a fight the celebrating Ellmann and the entire RWE team in scenes that badly let himself down but are really, really, REALLY funny to watch. As you can see after 6 minutes 20 here. Hilariously he storms on to the pitch at the end for another pop at Ellmann. From one blogger to another thank you Mario, thank you for this anecdote.

Now, someone get me a bucket of cold water and a stiff broom. I’ll clean this shit up myself shall I?