What's AiT gonna look like with a Chimney Corner on it?

In a rare occurrence on AiT here's a bit of background to the clubs involved. Dundela FC were formed by employees of a dairy in 1895, have played at their Wilgar Park home since 1900 and won the Irish Cup in 1955. For a bit of balance some background on the Chimney Corner (of course Chimney Corner). They are captained by “cult hero and former Inter Milan star Connor Murray” and the clubhouse “really needs a refurb as its well shabby...& is always freezin! Cheap drinks tho.” Hmm... 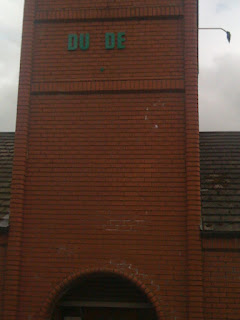 Dude! Totally! Radical!
Getting into the ground was a mission. Forty five minutes before the ground and the turnstiles remain closed and the staff in the, distinctly lacking in craic, clubhouse have no idea how to get in; "is it a paying match?" I stormed the players and officials entrance and, despite signs on the wall asking all ex players to stump up some cash for entrance, no one wanted to take my money.

Thirty minutes before kick off. Nothing. 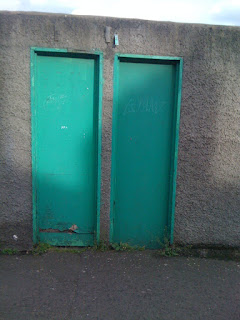 The ground is a ramshackle, overgrown beauty. A concrete stand is covered by a series of holes were a rusty corrugated iron roof use to be. Seats from a school classroom are bolted to breeze blocks and a dilapidated park bench slowly erodes away as the nine people present before kick off enter. Three of those present are Chimney Corner fans, a doff of the AiT cap to you sirs. 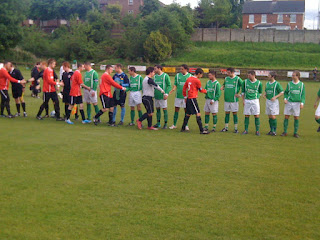 The Northern Irish peace agreement.
Four minutes in and its apparent why Chimney Corner have conceded 92 goals in 28 matches. The Chimney sweeper (sorry!) is unable to cut out the cross and the Dundela striker able to beat the goalkeeper, who was recently turned down for a job as a leprechaun for being too short and has never been on a fairground ride more dangerous than the teacups, led to the start of a period of play where Dundela are made to look like world beaters by Chimney. Flicks, step overs, dummies, chest passes and Cruyff turns are all deployed in scenes reminiscent of the 1993 Weymouth Eagles Under 12's, where a young Kenny Legg dictated play.

"SLOPPY, SLOPPY, SLOPPY!!!" Despite the absolute pounding being delivered Dundela's greying Noel Gallagher alike centre back isn't happy. He needn't worry though. If Dundela are Oasis, Chimney Corner aren't even Beady Eye. Heck, they're not even Brother. 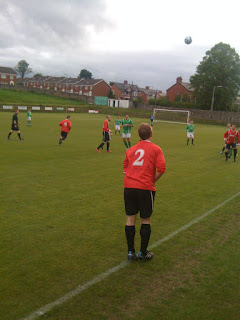 Token match shot.
Chimney collapse (yes!!) mid way through the first half. Their defence being as useful as chimney in house with central heating, and they concede three goals in ten minutes. The goals just flue in. (Sorry!) The odds are now against Chimney stacked (I don't let the draconian rules of sentence structure stand in the way of a weak pun) and their defence is so wide apart that Santa, his reindeer's and a double decker bus full of elves would have no problem getting through it. 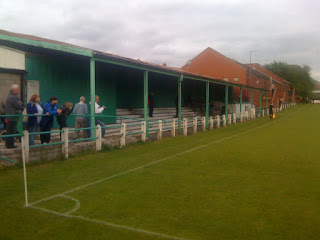 Kingdom of rust.
After donning hiking boots and consulting the contour lines on a local ordnance survey map I navigate my way through the terraces and their extensive covering of moss, dandelions, stinging nettles, an old badminton racket (really) and a leprechaun (not really). Fantastic stuff. There is an denser layer of vegetation on the steps opposite the main stand and this all serves to create a wonderfully atmospheric old ground. You can almost see the men in flat caps spinning rattles on the terraces during the cup run of 1955. 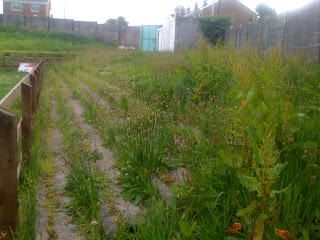 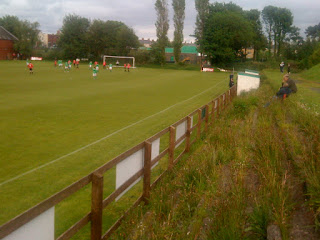 This man has lived on this terrace for 17 years, surviving only on the wildlife that exists in the undergrowth.
Despite being 4-0 up Noel Gallagher maintains his crusade against sloppy defending, the Dundela manager vigorously contests an offside, "no way, no way lino", and wayward balls are hastily fetched from a grass bank by a man dressed fully in a Dundela tracksuit. The deluded Chimney fans see a puff of hope, "come on, they don't want it any more!". Bonkers. Dundela are 4-0 up and pissing down your chimney sirs, how do they not want it any more?! Try telling any of these people that this match and these teams don't matter. 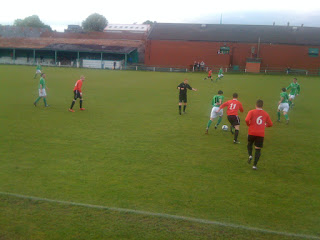 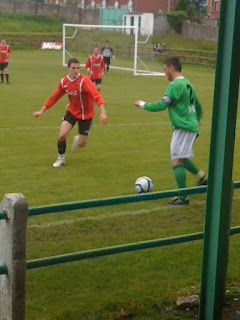 Token match shot III
Duns get a fifth early in the second half and a Chimney goal after 60 minutes has their fans smoking with joy. As the second half continues the rickety stand takes a pounding from all angles. Miscued clearances land on it, scattering rust on those below and action in the kick boxing club, that backs onto the stand, causes it to rattle. 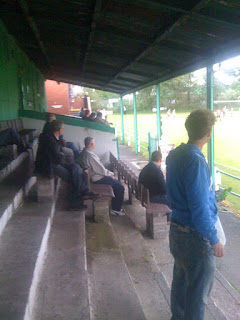 Dundela is a great little club and well worth a look before it loses it's fight against mother nature. Double AiT thumbs up.
Posted by Kenny Legg at 17:02