So tonight I'm gonna party like it's Swindon Supermarine.

You've had a great year at school. You and your friends are the most popular group, you've all got straight A's and can't wait to go to college. Today's the big end of term party, everything's in place and looks great. The venue's packed, the suns out, the DJs promised some chooons and the burgers and ice cream are all plentiful.

But what's this? The Church Hall has been double booked. The goth kids from just up the road have also booked it and are planning a séance to try and summon up the ghost of Robert Smith's empty hairspray cans. They've had a tough year though. Their Dad's abusing them, he's tried to kick them out, pinched their pocket money and dobbed them in for cheating when they didn't.

Champions Truro are all set for a promotion party and grumpy old Weymouth are in town looking to spoil the celebrations by getting a result, any result better than that of relegation rivals Didcot. 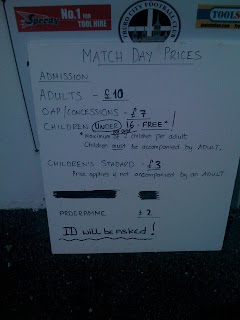 Well, that's nice and clear then.
No one wants to go to a party where the DJ is shite. I don't know who booked the DJ but a mighty doff of the AiT cap to you, he was channelling the majesty of Radio Norwich's finest, Alan Partridge. Indulge me a little here reader, here are some of his pre match finest moments:

" You get a great view from the grass bank there....it's probably the best view of a pitch anywhere.... in....eh... Cornwall actually."

"Please sit anywhere you like......except in one of the designated areas for officials....Feel free to change ends...(forlornly) not sure if well be able to do that next season."

"Please drink alcohol only in the fenced off patio area. We have uniformed stewards to keep an eye on you........and a big welcome to them."

"Can you hear me behind the goal?? Can someone give me a wave? Thank you sir. I've got to check my audibility. I apologise for my voice........laryngitis

The absolute peak of his Partridgism comes with; "The Conference South could be a jungle couldn't it.... and here's Guns and Roses with 'Welcome to the Jungle'." Hat off to you sir. Can you follow me around and soundtrack my life? 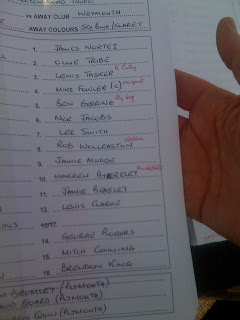 My heroes
Football anyone?

This was a very popular party for Truro, Cornwall hadn't seen a turnout this big since a ship last run aground and as a result kick off was delayed but fifteen minutes. *fires party popper*. This means we have the advantage of knowing how Didcot are doing and by kick off they're already one down.

Which is good, as it only takes two minutes for Truro to score. However its the Weymouth fans that continue to make the noise. Doff of the cap to the 100 or so Weymouth fans dotted around the outskirts of the party today, especially the yoof, who have been a noisy credit to the club this season. Some great chants today, my favourite being in a vocal salute to the tasty and nutritious Dorset Knob (its a biscuit-calm down) when compared to the Cornish pasty. Also, "town full of smugglers, you're just a town full of smugglers". Brilliant. 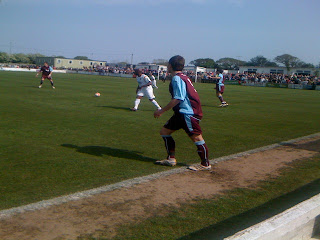 Token match shot
I missed our equaliser due to too many pre party Panda pops and, like a fair few Weymouth fans missed the fact Truro has been given a penalty, which they scored from. There you go two goals and all it gets is 2 lines.

Sadly half time didn't bring more from Partridge, possibly trying to calm some angry farmers, it do however see a sudden outbreak of Winston Churchill impressions amongst Weymouth fans, with the V salute used to communicate the news that Didcot had fallen further behind. Fantastic news! Add to this a Weymouth equaliser from a miscued clearance from a Truro defender and its looking like the cool kids and the miserable bastards are going to get along just fine!

News of a third goal for Didcot means we're safe! Truro score a third, but its irrelevant. We've both got what we wanted; Truro can get excited about a trip to Weston Super Mare next year, while we can be grateful about going back to Swindon Supermarine. 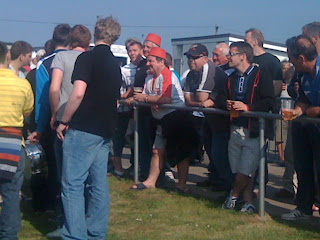 I don't care if you have won the League there is no place for fez's in football. Anyone wearing a fez at football should be shot. Just like that.
The party ends beautifully with the goths and cool kids metaphorically getting off with each other. As the Truro fans gather around to see them pick up the Southern League shield, we sung 'Championes' and were applauded by the Truro fans. Beautiful.

Meanwhile somewhere in Cambridge one social misfit, isn't so happy. He'd planned his own little party, got his missus to lay on another extensive buffet but, for the second time recently, he's found himself alone with the pineapple chunks. Once he finds out that every one's had a great time, especially the miserable kids, at the party he wasn't welcome at he's probably going to cause more trouble than a disgruntled American Marilyn Manson fan with access to Daddy's firearms on prom night. Therefore there's no guarantees we'll be at Swindon Supermarine, or anywhere else in the Zamaretto next season and who knows what the summer will bring for Weymouth FC and it's, for today at least, happy fans.