Groundhoppers of the world unite and take over.

Keynsham Town v Hengrove Athletic
Friday 22nd April 2011
Toolstation Western Football League, First Division
The Crown Fields, Keynsham
Attendance: 71
Todays Toolstation fixtures and bank holiday combo brought some significant mental anguish on my part. There were multiple opportunities to fit in two (two) tinpot games on the one day. Ill admit it was tempting. I've done two games in one day before on the EFW big boys beano, that's ok though, that's in foreign and therefore ok. To do two (two) Toolstation games in one (one) day just seems a little bit wrong, a little bit groundhopperish, am I prepared to cross this milestone and admit I have groundhopper tendencies? 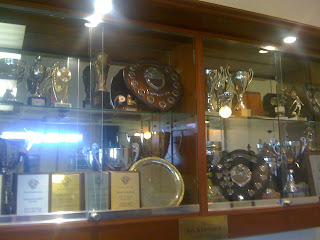 Keynsham have obviously had a very succesful season, as this was the trophy cabinet contents when I came here in August. So succesful infact that they appear to have won the World Cup (top left)
Thankfully a few trustafarian scamps decided to have a little rock throwing competition with the local constabulary and the chance to have look at a smashed up Tesco was more alluring than Bradford Town v Westbury United. A decision vindicated by the presence of a few, easily spottable, ground hoppers at the big (ironic winky face) Keynsham v Hengrove Athletic clash. 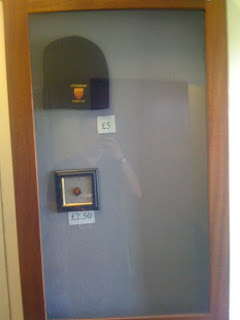 Keynsham FC Megastore.
My first visit provided a chocolate bar based puntastic report and today's match provided another golden opportunity when the tannoy announcer mumbled the magical words "and today's referee is Mr Jack Daniels" WOOO there sir. Sorry? Jack Daniels? Surely this is some sort of wind up? What kind of parents do this? Jack is barely old enough to purchase his beverage namesake and if parental cruelty is not evident in his name the fact that Mr and Mrs Daniels allowed their son to become a referee surely warrants a call to Childline? 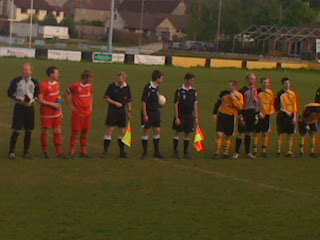 Keynsham have the first opportunity to put the ball into the net after a WKD bounce deceives the Hengrove keeper, however the striker was unable take advantage and put the ball in the Skol net.

They do manage to get the thirst goal after (J)20 minutes. Keynsham's number ten ran down the line like White Lightning and managed to bobble the ball home, however with some Budweiser defending Hengrove could have stopped him at sourz.

Its clear that there a few people taking advantage of the two games in a day opportunity. One groundhopper is easily identifiable by his lank hair and bum bag, some say fanny pack, combo. Seriously, its 2011, there is no excuse for a bum bag.

Behind me sits one groundhopper, let's call him Dennis. (Dennis Hopper? Ah, forget it), reads the print off the programme through his massive square glasses - think Elton John circa 1976. 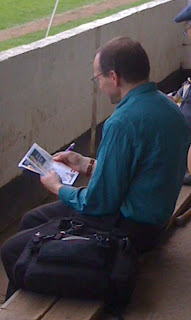 Dennis Hopper
Its the second groundhopper though who really catches the eye. An old boy, dressed resplendently in a suit accessorised with an antiquated pair of well eyed binoculars. Quite why binoculars were required when you're practically sat on the touchline and not much was happening anyway I'm unsure. Maybe he was indulging in a spot of planet spotting whilst the game went on, or maybe that was just a weak set up so I could bestow him the name Space Hopper. (I thank you)

There was also a man who looked a lot like 1999 TVs Beppe Di Marco.

Jack Daniels had little to do in the first half. He keeps the game flowing like Guinness at an Irish wedding and Fosters good relationships with both sides by communicating his decisions, although a heated discussion with the Keynsham manager at half time suggested things could turn (whisky) sour in the second half. 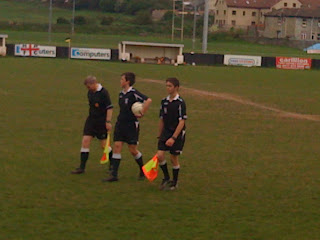 At half time the gravitational pull of Space Hopper drags Dennis into its orbit and the pair sit together and discuss the merits of A4 polypockets over cardboard envelopes for keeping programmes pristine. Probably. 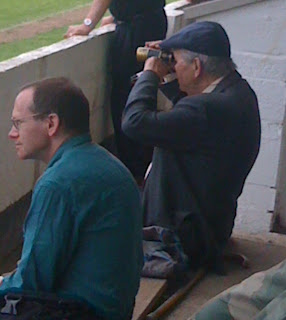 Dennis and Space together in perfect harmony.
A second goal for Hengrove arrives after some gin-orous defending allows the attacker to get a Schnapps shot away and into the corner of the net.

Like a cheap alcohol fuelled punch at a student party, combined with a dodgy kebab, an unwanted mix up has disastrous consequences at the back for Hengrove shortly after. A miscued backpass allows Keynsham parity (Mad Dog) 20 (20) seconds after the resulting kick off. This lead to some angry mutterings from Dennis and Space who were busy making notes of the Hengrove goal and missed the Keynsham Aftershock. 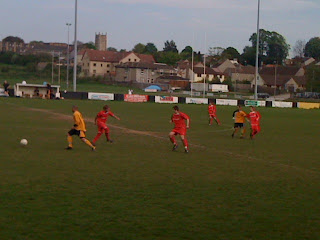 Token match shot.
Hengrove scored again, a shot that nestled in the corona (sorry, that's shit) of the goal net and set about protecting their lead from a Keynsham onslaught. A dangerous free kick leads to a shout of "who's picking up this cunt here" but the ball, like the hair from a vomiting girls face, is cleared from the danger area. Hengrove had a couple of chances near the end tequila Keynsham off but in the end hung on to their 3-2 lead.

Dennis and Space make a few final notes, Jack Daniels. picks his ball up and I wander off to plan tomorrows trip to Zamaretto (an actual alcohol) league action.