Warning. This blog contains a happy AiT. This is still AiT. Your computer Internet is not broken. Do not contact your Internet Service Provider.
I bloody love you football. I mean it I bloody LOVE you. You're my best friend you are, you know that? Come here. Let me hug you you big idiot. Let's never fall out again.

Take a look at that score up the top there. Look. A WIN. A bloody win. I thought I'd never see one again. You get use to the misery, I wear the misery of being a Weymouth fan well and Ive almost forgotten what it's like to see us win a game!! 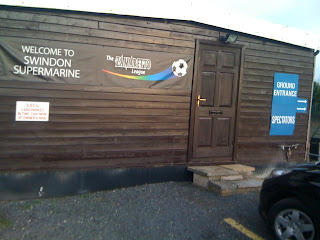 Swindon Supermarine 0-1 Weymouth
Byerley 90
So to see us win tonight with a battling performance after being down to ten men with a last minute goal is fucking amazing. I celebrated like an absolute idiot, I celebrated like we'd equalised against Forest again, I ran along the stand to be near where the players were celebrating and, to be honest and as you may have guessed, I celebrated much more than the tinpot surroundings warranted. But I don't care, this was brilliant. Yes, it was only Swindon Supermarine and yes we still might be going down/bust/to Dorchester but right now thirty minutes after we scored that goal my heart is still racing, Weymouth chants are running through my head on repeat and I'm still attempting to high five strangers whilst shouting "WE WON" in their bemused faces. 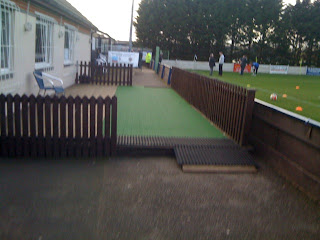 Byerley 90
There was something in this game from early on, we created chances in the first half. I've not seen us create a proper chance for ages, some of them were even on target. I even found myself shouting encouragement. This hasn't happened for about 2 seasons as, at the games I've seen, it didn't really seem worth it, it would be like providing vocal encouragement to a lethargic slug taking its place in the stalls for the Grand National.

That's not to say it wasn't without scares from Swindon. They hit the bar twice in the first half but, like at Chippenham, there was something in the air. At Chippenham impending disappointment filled the nostrils but I could smell the sense of....well, maybe not a victory but not a sense of impending crushing weekend ruining gloom that hit me on Saturday.

Early in the second half we went down to ten men, with central defender Ed Palmer sent off for an alleged stamp. I had my Wengervision on and didn't see it but all the Marine players (the Mariners? Oh Mariners. Verdis. Indie disco. Scoffers. Chips and cheese. Good times) went running to the ref and after a short delay Palmer was dismissed. 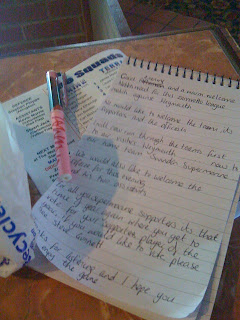 So backs to the wall and we absorbed a lot of pressure and clung on. I'd have taken a point from the moment Palmer was sent off. Keeper Nortei somehow made a save from a free kick given after he picked up a back pass when it seemed the ball was already past him. He made some inspired, some lucky, saves and gains an AiT cap doth for his performance. He's just lucky I didn't get close to him after the match as I'd have probably kissed whatever part of his body turned that free kick over the bar. Even more amazing is the fact he turned up shortly before kick off after playing for his college in the day time. (College. Mariners. Ver....)

Marine had a couple more cleared off the line as thr second half went on and by this time over 260 people were following updates on the Weymouth forum, not bad considering only 147 had turned up at the game. The days of radio commentary and text commentary on the BBC website on our games are long gone sadly and we're one relegation away from having to check page 399 of Ceefax on a Saturday evening for the score. 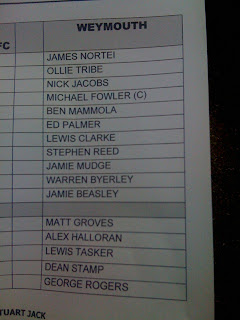 Byerley 90
And then in the 90th minute it happened. Mudge made a run down our left, cut inside the box, I hovered above my seat, the shot crashed against the bar, the anguish kicked in, Byerley picked up the ball and rifled the ball in past the desperate lunge of the defender. I'm off and celebrating like a mentalist. Weymouth have won the World Cup, the Champions League, the Dorset Senior Cup, Miss World, a tenner on a scratch card and an orange football from a stall at Weymouth carnival and for those few seconds that magical feeling of a football fan celebrating a last minute winner can't be topped or described. You lose yourself, you have no idea where you are. Against all odds Weymouth are going to win!! 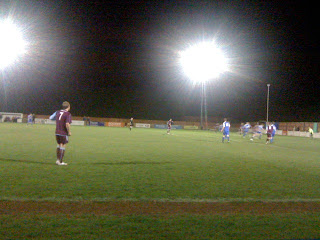 Byerley 90
And we do! We actually bloody win. 10 men, 2 off the line, 2 against the woodwork, some great saves and a last minute winning goal. I bloody love you football. At the final whistle I'm not just over the moon, I'm over Neptune and moving far out in the cosmos that not even Professor Brian Cox looking in a powerful telescope can see my dust. There was dancing on the streets of Supermarine after this result. By me

No mention of anything off the pitch by me tonight, tonight that doesn't matter, tonight is all about the boys on the pitch and feeling great after watching a Weymouth FC victory.