A proud 105 year history involving a German league title and Cup in the trophy cabinet, numerous German internationals coupled with a season that has started with the opening of a new 20,000 (twenty thousand) stadium, two wins in the first two Regionalliga games and 7,000 (seven thousand) fans attending an away game mean that Rot Weiss Essen firmly adhere to the definition of a sleeping giant (German: schlafender Riese) in any language. 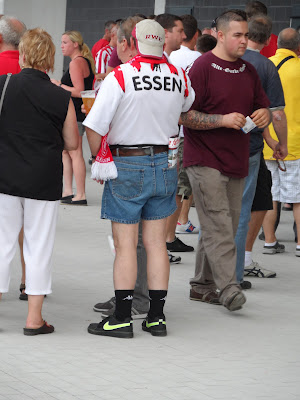 Rot Weiss Essen's new kit initially met with some scepticism but the cut off jeans and baseball cap look soon won the fans over. 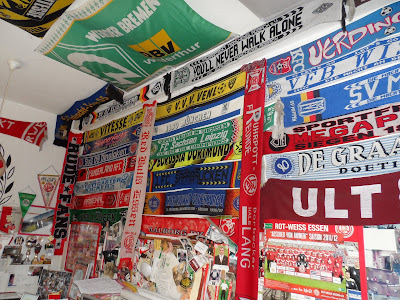 *swallows hard*
Thanks to RWE’s Fan Liaison Officer Roland Sauskat we are able to secure “Access All Areas” passes and have a shufty around the historic old ground, two sides of which still stand behind the new ground. Roland shows us round a treasure trove of bizarre delights. Go through the door with the picture of the Pope singing RWE songs, take the concrete staircase past the RWE lighthouse, walk into the office where the walls are made of football scarves, try on the RWE slippers, turn back out, go straight on at the huge RWE Lego badge, stop to get a photo of the world’s biggest pennant and finally reach your destination of a tiny smoky bar where a barman,whose appearance suggests he’s been to some ridiculously debauched house parties in his time, serves ridiculously cheap beers. Roland is my hero. 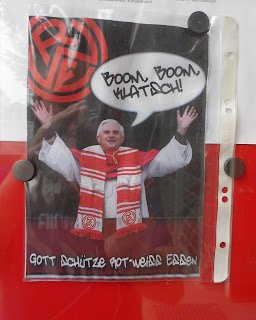 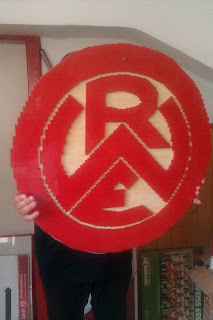 A botched science experiment on a thunderous night means that this mans shoulders now carry this huge RWE sign while his face remains alive on the side of the old stadium. 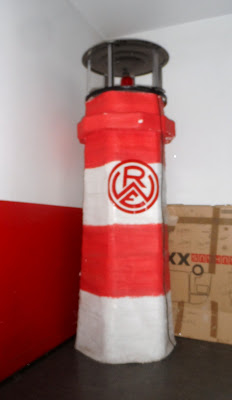 Admit it, you thought I was joking about the lighthouse didn't you?

Bad news: Despite a campaign to leave one of the old terraces as a monument to the old ground it’s all gonna have to go to make room for car parking spaces. Boo.

Spiffing good news: The magnificent news for fans of floodlights, the first in West Germany no less, is that one of these beauties will remain in order to light the aforementioned car park. Hurrah. 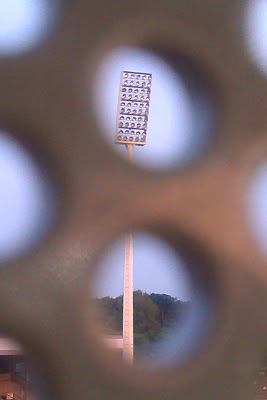 The first neighbours to stick their noses in to RWE’s new home and offer a cup of sugar were Rot Weiss Lintorf last week in the Niederrhein Pokal. They were quickly shown around, allowed to admire the new fixtures and fittings, given a 8-0 run-around of the place and then politely booted out the door before the star guest could arrive.

The second guests over the threshold of the new Stadion Essen are everyone’s favourite DIY enthusiasts Union Berlin. 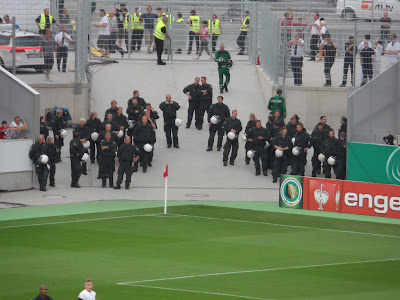 The Police deployed an interesting formation prior to their surprise kettling of a solitary corner flag.
Last year RWE welcomed Union into their crumbling Hafenstraase home before dumping them whimpering on the doorstep like Fred Flintstone after a 6-5 win on penalties in the first round of the DFB Pokal. As if by magic they’d only been drawn against each other again. 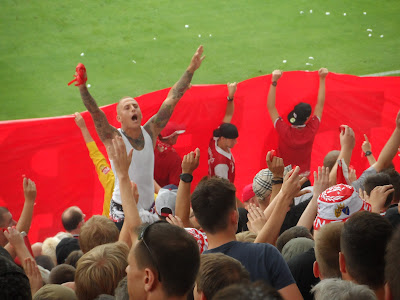 Eminem is an RWE fan.

The new house is full by the time we arrive fashionably late to the party. Everyone’s drunk, the music is loud, everyone’s got their feet on the new furniture and are boisterously singing songs. Being cool kids we head straight to the kitchen pick up a box of Stauder beers, some sausages and to try and chat up girls. There are no girls. We decide to watch the football instead.

“Ohh, who is going to clean up all this mess” is a thought that doesn’t go through my mind as the RWE fans  launch a blizzard of red and white paper into the air as the teams come out. It gets everywhere, slowly floating down to cover every party goer, all over the garden, all over the already beer soaked new seats. It’s gonna be a nightmare to shift but looks an amazing sight. 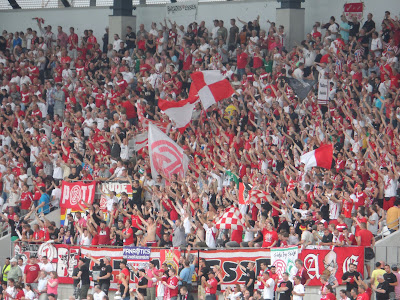 At this point in the night the RWE fans were already flagging a bit.

Throughout the match there is little between the two sides, Union are poor. RWE's Kerim Avci leads the charge forward as the defence rebuffs Union attacks. While the action on the pitch is entertaining off it it’s superb as the RWE fans create a raucous atmosphere at their first big house party. As with any good party a fat topless man with a megaphone shouts at you to chant. You oblige. You can’t help yourself. 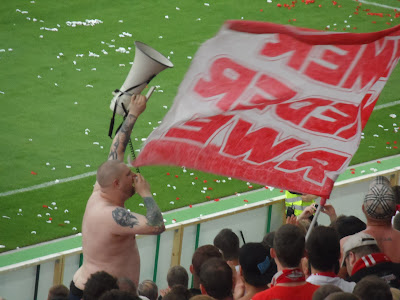 Will the owner of a blue Mazda with the registration plate D1882 GHJJ811 please move it as your number plate is blocking the emergency exit, thanks.

As the sun sets the tension grows and the noise gets louder still, most RWE fans are up on the seats singing “Forza Essen” over and over, singing “nur der RWE” (“only RWE”) over and over again as Union gradually take control. As the referee blows to signal extra time the party falls briefly silent, a stillness quickly broken by the stampede to test the new toilets, grab boxes of frosty Stauder beers and see if there are any girls in the kitchen. There are no girls. We decide to watch the extra time instead. 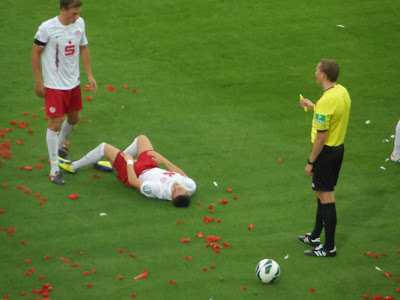 The extra time is full of tension, concentration levels are high and the singing phenomenal. “nur der RWE” is sung like a drunken karaoke song on repeat for ten minutes, Union's Simon Terrode hits the post on 118 minutes but the singing is unrelenting. 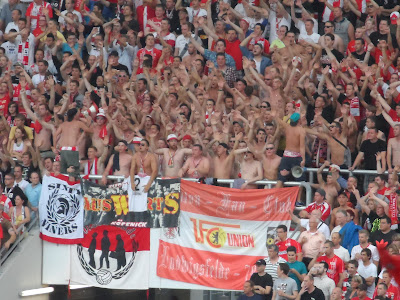 Ah yeah, Union had some fans there too. Well played chaps, good effort for a Monday night.

On 120 minutes the singing stops. The sound of Union Berlin fans celebrating fills the air. One moments hesitation from Maik Rodenberg leads to Terrode scoring Union’s winner, sending Union players and management sprinting towards their fans and RWE collapsing players to their knees. One moments hush and then the first shout of “nur der RWE” leads to a deflated but proud rendition of the song. 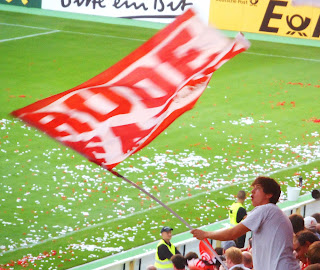 Of course "Rude Fans".
The last minute winner is the definition of heartbreaking but it doesn't spoil the party. With the passion in the newly built stands pushing Rot Weiss Essen forward it hopefully won’t be long before this all translates into success on the pitch for RWE.

Huge thanks to Roland Sauskat for making this such a brilliant day. Forza RWE.


For some proper pictures of the game head over to Danny Last's Flickr page.
Posted by Kenny Legg at 20:33