This match had a real lazy dog dangling afternoon feel about it. Both sides had nothing to play for and it seemed no one really wanted to be there. Except me and my tinpot companion. This represented one last chance for a bit of football and the opportunity of beers in the sun. Double thumbs up. 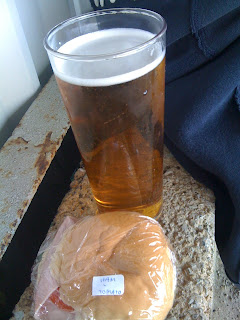 The non league lunch of kings.

The groundsman had seemingly given up for the season and the pitch fighting a losing battle to comprehensive covering of daisies and dandelions.

Both teams warm ups were pretty haphazard and one of the Calne subs clearly didn't want to be there. Evidence for this accusation being the cheeky smoke he had just before kick off, whilst listening to music through those gigantic headphones which seem to be an integral part of every footballers kit bag but your normal Joe Soap wouldn't dare wear. 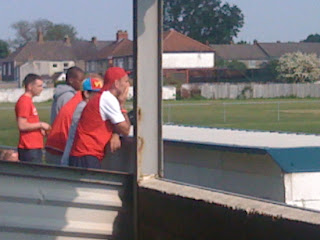 The half arsed standard of play was set in place early on and in the first minute the first hopelessly over hit cross of the day lands in the middle of some ferocious stinging nettles (or stingers in Bristolian). This leads to the first of many times in the afternoon where the sophisticated ball fetching device is called for – a young lad with a massive plank of wood. Play proceeded as the lad thwacks away frantically to fetch the Mitre Delta (size 5) from Bristol's biggest stingers bush, with only a dream of a coat made of Doc leaves to protect him.

There was one man there who could be bothered though. RGSG assistant manager, Bob Johnson. Bob spends the entire match bellowing incomprehensible advice via the gift of his ridiculously gruff voice. Bob has the voice of a man who laughs in the nicotine stained face of pansy 20 a day smokers, his drawl suggesting that 20 Benson & Hedges are as common place at the Johnson breakfast table as bacon and eggs. 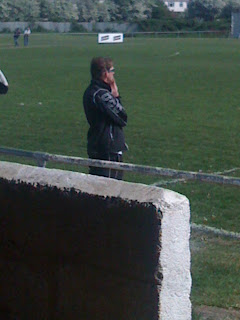 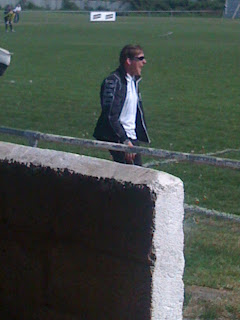 The first half hour was notable only for the presence of one badly stung kid and the appearance of a couple of youths with enough water bombs to flush out the contents of Bob's lungs. The threat of an unexpected soaking attack seemed to spur RGSG into action and they scored after 32 minutes, with a goal I can't remember already. I was more interested in the potential deployment of the cluster water bombs to be honest. Despite the efforts of the kids, who went on to compare their water bombs to both nipples and arses, I was paying just about the right amount of attention to notice the referee falling over. WAHEY! 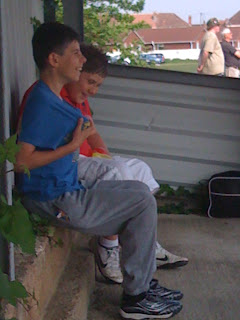 Half time clearly represented the highlight of the match, for the Calne officials. In their designated clubhouse area they got right stuck into the complimentary sandwiches and swiss roll!! Of course swiss roll. Football needs more swiss rolls. 'I'll have two bovrils,and a swiss roll'. 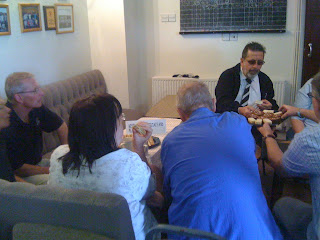 For the second half the water bombers took up a place next to the Calne dugout and surely some exquisite japery and tom foolery awaited, but no. Sadly not. The water bombs were forlornly disposed of in the stingers, the looks in the yoofs eyes suggested they knew these bombs should have been deployed elsewhere.. 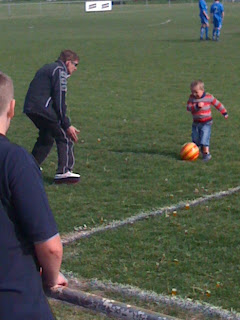 Shortly after swiss roll o' clock Bob reached a state of excitement not seen since the last time he got 2000 fags from a dodgy shipment from Calais when RGSG went two nil up. However even this doesn't completely calm Bob down and he continued his quest to bellow up a lung in encouragement. 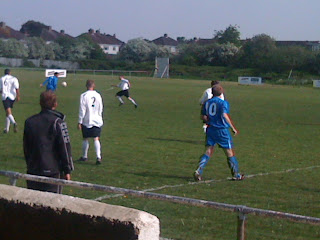 This cycle of bellowing and blistering of a small child continued until the ref decided he couldn't be arsed any more and went off injured after 65 minutes. To be fair he probably saw the swiss roll cupboard, fancied it was unguarded and saw an opportunity for some chocolatey and creamy goodness, for this reason he gets an AiT cap doff. An RGSG official was then removed from assistant ball retrieval duties and sent to the run the line and it was only a few seconds before he was on the receiving end of a torrent of abuse after disallowing a Calne goal. 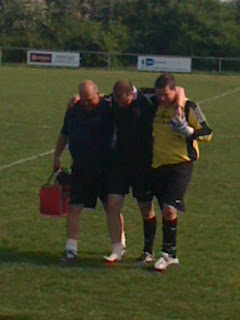 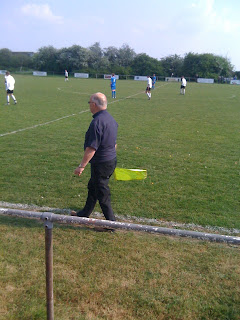 With Bob threatening to cough up the contents of his lungs and cause a toxic slick not seen since the Exxon Valdez ran aground things started to get a bit feisty. The stand in linesman was called a “cheating cunt” and the Calne assistant manager then tried to pick a fight with an RGSG player. Fantastic stuff. After another, slightly dubious, decision the Calne assistant manager decided he's had enough, he wanted a bit of swiss roll and with the phrase “fuck this, I'm going in” flounced off to help himself to the unguarded RGSG cake tin with 10 minutes remaining.

Shame, as he while he was stuffing his face he missed the RGSG third. This was a goal celebrated by the striker bundling Bob, who fell flat on his arse, all the time still bellowing some half baked tactical nonsense.

3 goals, 3 beers in the sun, a badly stung child and two comedy assistant managers meant I was very glad to be there, even if no one else really was.