Sneaking In at Young Lions FC

My tour of Singapore football grounds wound up at the Jalan Besar Stadium, the current home of Courts Young Lions, the Football Association of Singapore (FAS) and acknowledged as being the birthplace of Singapore football. The original stadium was built in 1932 and hosted prestigious Malaya Cup matches, Asia's longest running football competition, between 1932-1966. The stadium was closed in 1999 the capacity reduced to 6,000 all seater and the pitch re-laid to consist solely of astroturf (I've never smoked astroturf). 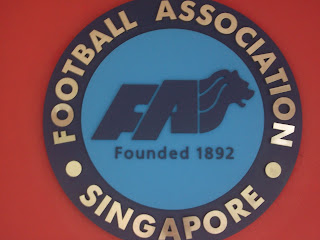 The stadium plays an important part in Singapore's history. During the Japanese occupation of the country (1942-45) the stadium was one of many 'screening sites' used to identify members of the local population who were deemed as “anti Japanese”. Those who failed the screening were removed and sent into trucks to be transported to killing sites. In total this system of ethnic cleansing, known as “Sook Ching” (purge through purification) saw between 5,000 – 70,000 ethnic Chinese killed in Singapore.

Currently the stadium currently hosts S League team Courts Young Lions, as well as hosting one live match a week between two other S League teams which is broacast live on Singapore TV. 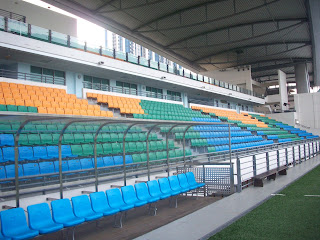 Young Lions were founded by the FAS in 2002 and consist mostly of players from Singapore's national U-23 team, making them one of a few age-restricted football team competing in a professional league. The FAS hopes to use the Young Lions to expose young players to top-level competition, thus helping to prepare them for international tournaments such as the Southeast Asian Games and 2012 Olympics. 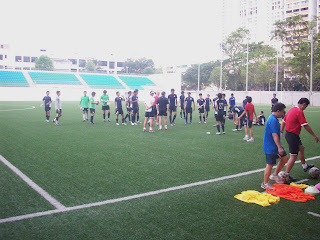 The Young Lions in training.

However, the removal of promising young players from their original teams to play in a team managed by the FAS, in a league managed by the FAS, has met with severe criticism in Singapore. Fans are disgruntled at the “manufactured” nature of the side and for reducing the incentive on clubs to develop their own youth structures and as such the presence of Young Lions been identified as a contributing factor to the declining interest in the S League. 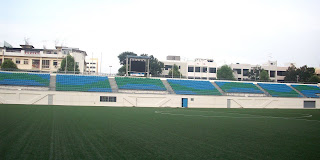 Prior to the start of the season Young Lions signed a S$1 million (roughly £500,000) sponsorship deal with Courts, Singapores largest electrical, IT and furniture retailer. The deal has seen the team renamed as the Courts Young Lions. 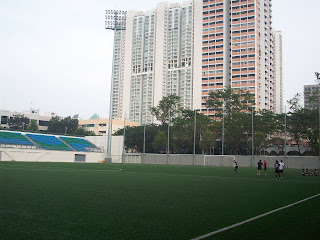 The biggest fixture in the Courts Young Lions 2011 season is due to take place off the pitch on the 3rd of March. Courts has signed a partnership with the, newly reformed, New York Cosmos and as part of this deal Pele, the club's honorary president, and Eric Cantona, the Cosmos' director of soccer are scheduled to appear at the Jalan Basar. The “football fiesta” planned for the day forms the basis of the club seeking to broaden it's appeal amongst young fans, combat scepticism from the local sporting community and challenge the more established clubs for the S League title.