Living the field of dreams.

Everyone loves a good field. Fields are good for two things, football and festivals. Oh and maybe getting a bunch of yokels cracking some limbs chasing a cheese down a hill. We tried a similar thing in Dorset once, took 47 men just over an hour to halt a runaway Dairylea slice.

After scouring t'internet and seeing there was an opportunity to attend the self appointed "field of dreams", Mangotsfield United, two questions arose. One: Have I still not found a better use of my Saturdays, and two: How will Mangotsfield United FC go about re-creating my dreams? Even that one involving me, Kirsty Wark, a watering can full of butterscotch Angel Delight set in a deserted Fun House after Pat Sharp carelessly left the door ajar? 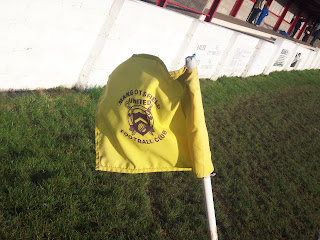 mmmm arty.
Happily the match offered a chance to witness a top of the table battle, 3rd versus 1st no less with Sholing FC the visitors. Unhappily, my team, Weymouth are likely to be playing one of these teams in the Zamaretto Division One South & West next season.

Sholing were known as VT FC until the start of this season, this being short for ship building company Vosper Thorneycroft and they are still nicknamed 'The Boatmen'. This gave today's match an element of a land (field) versus sea conflict, on a pitch that resembled a mixture of the two. Having been promoted twice in the last seven years Sholing have risen faster than a submarine in an emergency and look set trouble the great Sea Captain Zamaretto Premier for permission to come aboard shortly. 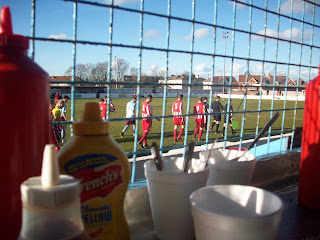 The festival line up.
The festival spirit of the Mangotsfield fans was evident early on, although numbers were smaller than a festival headlined by Jimmy Nail, Sash, and a 4 hour set by Dion Dublin on the Dube, and they continued to make a racket for the entire match. A doth of the cap in your direction sirs. All the classics were there, "does your crack pipe know you're here (eh?), a rendition of KC & The Sunshine Bands 'That's the Way I Like it' and "if you are a Yate fan surrender or you'll die" which brought an HMS Ark Royal sized chuckle from my belly. They also engaged in the classic non league scene of cheeky comedy banter with a couple of opposition players, whose stomachs could have also doubled as a small landing pad for a naval helicopter.

Sholing were all over Mangotsfield from the start and it was no surprise when they scored after 10 minutes and for most of the first half they were more dominant than a crack team of Somali pirates invading a small fishing vessel. 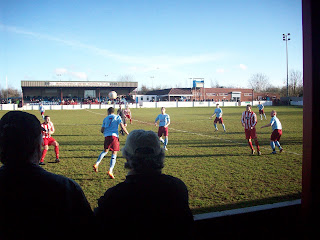 Token match shot
At half time the customary beverage was partaken and it was here that the field of dreams began to show itself. Every good festival needs a good headline act and Mangotsfield are able to offer it with no less than Rod Stewart (tribute act) himself headlining at the 'field in less than 2 weeks. 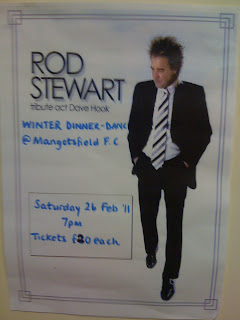 The warm up act. 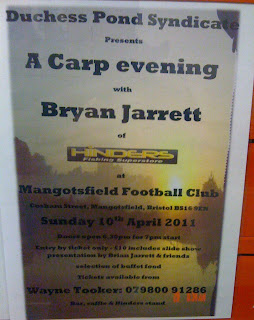 The headline act.
Festivals these days are less a hang out of your grubby soap dodging Levellers fan of the past and are now full of talentless "celebrities". Mangotsfield are happy to celebrate their celebrities, those players who have graced the 'field and gone onto better things with their pictures adorning the clubhouse wall. To call these celebrities is probably stretching it a bit granted but I will, Nicky Tanner of Liverpool I remember but Steve Tallboys anyone? 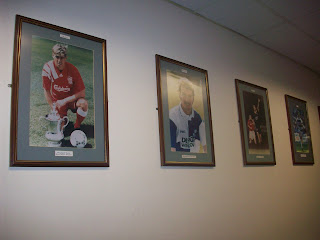 The hall of fame. In a BS16 postcode.
The Mangotsfield programme offers a late bid for the headline slot at the 'Two Pints of Lager and a Packet of Crisps' comedy tent at the festival, seemingly with a routine based on the 'Sky Sports Presenters Book of 101 slightly inappropriate and cringe worthy gags'. For example; "Alex Ferguson decided to hold a 1980s themed party for his players. Giggs arrived in a Cavalier, Scholes in a Sierra and Rooney came in an Escort. "

The 2nd half sees Sholing go 2-0 up before Mangotsfield launch a late comeback, sadly for them their comeback is more The Libertines (short lived and in front of a small, enthusiastic but slightly embarrassed crowd), rather than Blur (unexpected and triumphant in front of an enraptured crowd) but they battle well and get a goal back before launching an all out assault on the Sholing goal, the ferocity of which hasn't been seen since Daphne and Celeste pitched up at Reading Festival in 2000.

The final indignity of the last day of a festival is always trying to find your car in the dark, in a muddy field, whilst piss wet through and missing one welly and then and then being stuck in a queue of traffic longer than The Darkness' career. Thankfully for one Mangotsfield fan he has come up with the ultimate solution, park in the ground and watch the game from the comfort of the car. With genius like that he is clearly living the dream, in the field of dreams ,in an early 90s automobile. Well done sir and well done everyone at Mangotsfield. 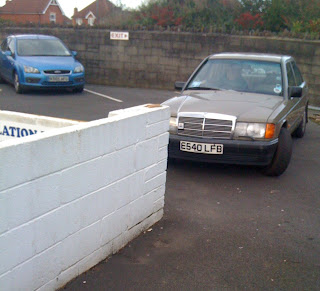 For a more focused blog on the match click here to read the 2011 - A Football Odyssey take on the game.
Posted by Kenny Legg at 17:36