Kenny was a Weymouth fan and he was always down.

Being a Weymouth fan is hard work. If the off field idiocy isn't bad enough the team manage to give you a kick in the balls and piss on your weekend. 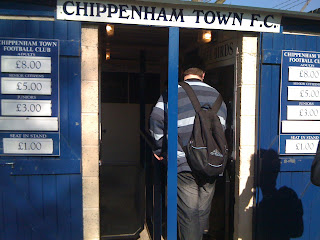 Since this last report, as with every time I seem to write a blog on us, we have a new manager, ex Tiverton manager Martyn Rogers. More importantly the sack of dicks that is George Rolls has now resigned as Chairman. However he, like another of our ex-Chairman, continues to hang around and cause problems. Problems such as:
On top of this add in rumours that property developers Morgan Swindle Sindall and joint owners of the land around the ground, had been seen at the ground taking measurements mean it's bloody hard work to support the club.

Having said that and spent many hours training myself not to care I came away from the last match I saw and set up a direct debit to splurge some money on the players wages, to try and keep us in this division and not sink any lower.

For more on the Weymouth FC story have a read of this article on the excellent Twohundredpercent. 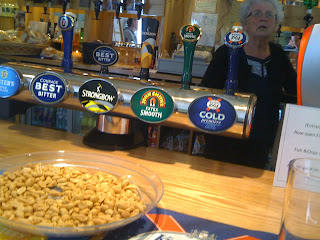 Beer. Bar Snacks. Cheeky young bar maids. Good times.
The match itself was wretched and as exciting as a milk float ride. We could only announce three subs and one of those was our assistant manager. Our latest goalkeeper, James Nortei, looked dodgier than the band Dodgy eating a multipack of Jamie Dodgers on the Dodgems and the rest of the team were pretty ropey, as you'd expect from our league position. However, it's games like this that it's important to grind out a point, to battle hard and dig in and you couldn't fault the players for their effort, even Nortei makes a couple of great saves as the game went on. 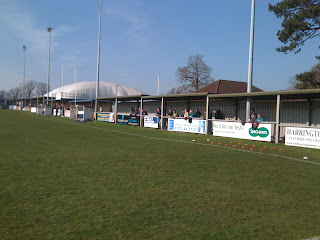 The 9 (nine) stands that make up the terracing at Chippenham.
However, you could fault my friend Lee and myself for uttering the Danny Baker endorsed phrase "nothing can go wrong now" after about 75 boring minutes. You could almost see the goal coming, as a Weymouth fan you get the ability to sense disappointment and are lured into it, however the way it came about and the timing of it mean this was a real sickener. 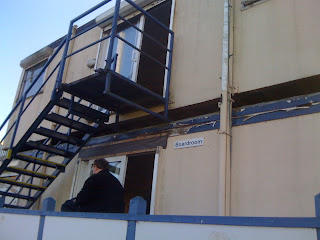 The executive boardprefab at Chippenham.
With 95 minutes gone, 95 minutes that would have made a Liverpool Europa League match look like a classic Nortei booted the ball out so that one of our defenders could get some treatment. Under normal circumstances Chippenham would give the ball straight back from the the throw in, but they decided to play on. The referee wasn't having this and decided to blow for some offence or other and give us a throw in, big mistake. Give us possession and we will lose it and we did. From this Chippenham attacked down the left, whipped in a cross and Alan Griffin acrobatically volleyed home - the shit house. 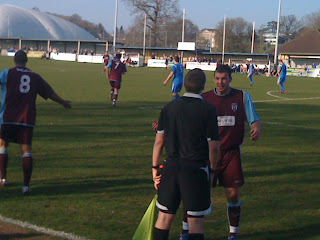 Token match shot.
After I've stopped swearing, worked out I've not seen us get so much as a point for 15 months, and composed myself I was ready to talk about football again. Later that evening on telling people I'm a Weymouth fan I get asked if I support "a proper club". The next person I met was a Yeovil fan and despite him being a decent guy who had mastered the ability of walking upright I still shuddered. Despite all the shit and the disappointment I'm still proud to call myself a Weymouth fan, still think we are a proper club and still hate Yeovil. 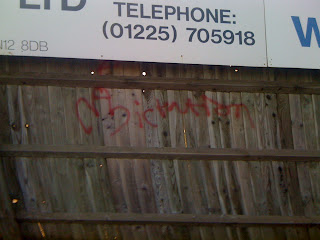 Graffitti of a cock. There's always time for that here on AiT.
Posted by Kenny Legg at 12:31