Adventures In Tinpot Versus The MONORAIL

AiTinpot: The name's Tinpot! Adventures In Tinpot. And I come before you good people tonight with a new blog. Probably the greatest... Aw, it's not for you. It's more of a The Ball is Round type of reader idea.

You rabble: Now wait just a minute! We're twice as smart as the readers of The Ball is Round. You just tell us your latest blog waffle and we'll read (and RT) it!

AiTinpot: I give you the Wuppertal MONORAIL!
[reader gasps]

Arriving at a ground by genuine, bona-fide, electrified, two-car MONORAIL can’t be beat. And unless you’ve ticked off Brockway FC, Ogdenville United, or North Haverbrook Alexandra I'm going to guess arrival at Wuppertaler SV Borussia’s Stadion am Zoo is a tremendously unique experience. 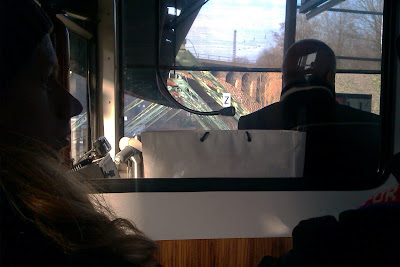 No, of course I wasn't pretending to drive the MONORAIL! Watch out for that Z, it's coming straight for us!

The MONORAIL trip from the main normal boring loser train station to the stadium whisks enthralled travellers above a filthy river lined by crumbling factories and provides voyeuristic views into dank living rooms. All along the route the underneath of the precariously dangling carriages have their bellies tickled by mischievous tree branches whilst they swing like a baby’s cot in a force ten gale at Dogger Bank. 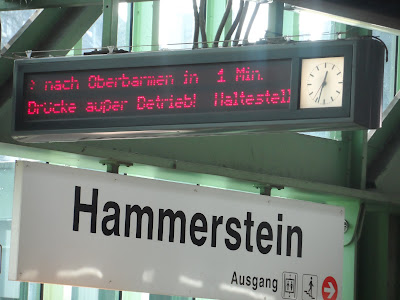 In addition to being at the (almost) end of a MONORAIL line Wuppertal have almost reached the end of the road financially. Slick transport related metaphor there Kenny, thanks, I know. They need to raise 35,000 Euros by 15th March to obtain a licence for next seasons Regionalliga. Clearly the obvious option was then to ask fans to donate blood for the club. Yep. Blood.

Now, I do a lot of great work for fourth division German regional sides that I don’t like to talk about. So, in order to help save Wuppertal I’d spent the previous night walloping myself in the schnoz with a slipper and, through an elaborate complex of bendy straws successful filled a rusty watering can full of freshly oozed, type tinpot blood which I proudly presented to the club at the turnstile. Turns out that’s not what they wanted. Boy did I look foolish....and horrendously pale.

The real plan is that for every new person who registers with the Blood Donation Service in Wuppertal they will give the club 40 Euros, while any previously registered blood leaker who donates will see 20 Euros to the club. Ahh.... 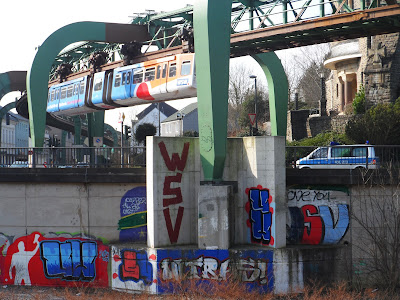 Wuppertal trainer Peter Radojewski received a TUC biscuit and some lemon squash in the week after squeezing out a pint of blood, potentially saving a life and a club. Whereas Matthias Hahn and his team of nerdsquares from the Wuppertal internet site proved as useful as a MONORAIL in a nondescript industrial town “We have red blue blood and don’t want to let WSV go under”.

Duffy: “There isn't a blood type Red Blue Charlie. It's exists in metaphorical terms only”

Fairhead: “Ahh, this boffin's screwed then. Next!”

Wuppertal's opponents today are FC Kray, (pronounced Cry – remember that it could be important later) who, by a quirk of a league restructure, achieved a double promotion last season from the 6th division to – yep – the 4th. Kray have 27 successful female teams that help to keep the club financially stable. In fact you could say No Woman No Kray....hey...it's pronounced cry remember? Gah....sorry. And it’s a lie. All for a rubbish gag.

The ground gets a double thumbs up on the AiT scale. Get yourself a ticket and hold on tight as we go on a tour. Looking from MONORAIL to left you've got:

A club shop tent thing. The Wuppertal SV ladies range clearly not as extensive as anticipated. 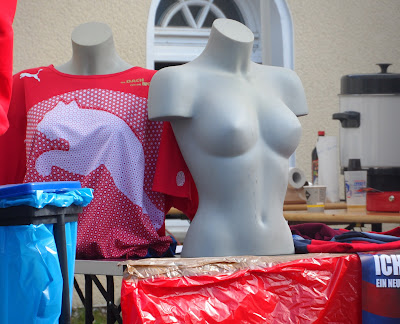 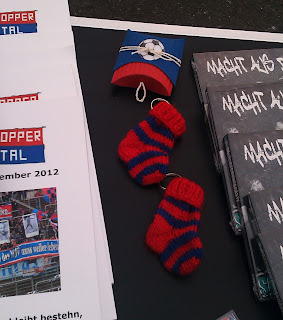 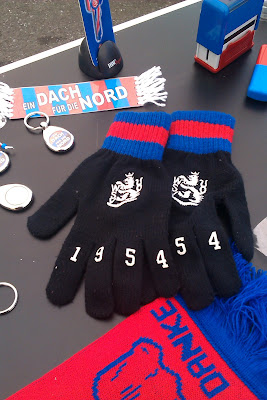 A cake stand. Our hands are covered in cake but I swear we didn't have any. 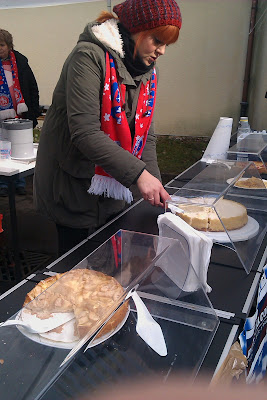 A huge, behind the goal open terrace with some steps about this big, some a little bit bigger – about this big where the Wuppertal lion mascot hands out autographs. I wasn’t allowed one apparently. *humph* 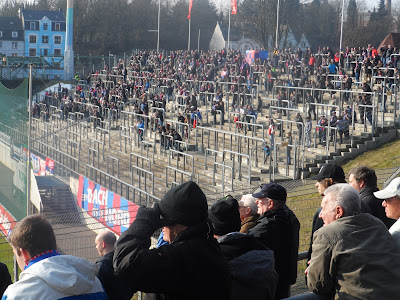 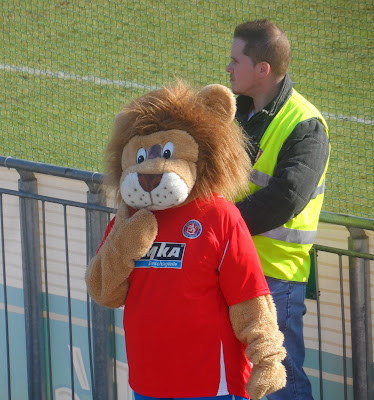 A 10 (ten) sided terrace along one touchline containing one area of uncomfortable looking seats and two of dilapidated terraces. The entire terrace rises and dips along the touchline giving it the same structural formation as a Quaver crisp. If you're wondering a ten sided shape is, of course, called a tenellalagram. 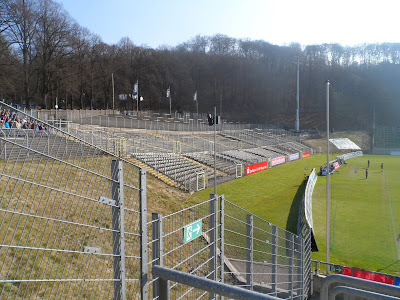 There’s a forest behind the ground just waiting for glory hunting supporters to shimmy up the trees during an all important DFB Cup game. Some freeloaders watch the game from here. 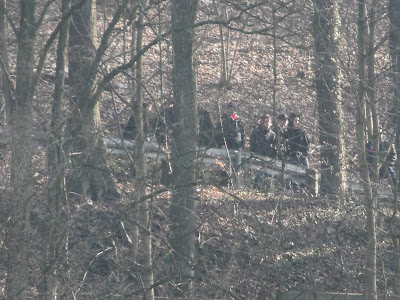 The Krays (pronounced Krays this time) stand in front of the huge scoreboard at the away end. 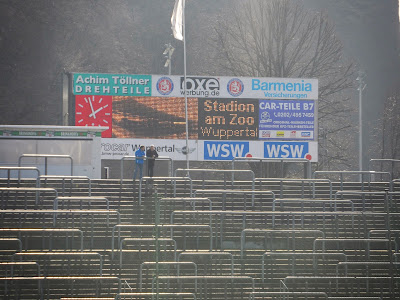 Slightly boring stand. No pics available. Yawn. Here's a man in a Kutte jacket instead. 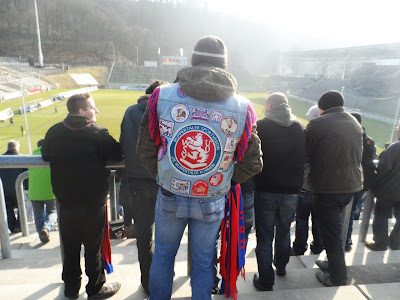 The obligatory club song plays over the tannoy before the game. Normally German sides prefer the 80's rock style club song but Wuppertal have chosen a song that sounds like Phil Collins farting in a slowly emptying lukewarm bubble bath. Awful. A MONORAIL passes behind the terrace and all is forgiven.

The PA announcer then announces the home team. Building up the first names and leaving a gap for the home fans to shout the surname being a staple of the curriculum at German PA announcer school. However it only works if the crowd respond and with only about a thousand people in the ground it was clear after goalkeepers surname was shouted by family members only the PA announcer had to go his own way. First names rise dramatically like the bag of Quavers terrace, pauses are left before he shouted the surnames all while an instrumental version of Jump by Van Halen soundtracks the comedy. *doffs MONORAIL conductors hat*

A man called Abel scored two goals for Wuppertal. One of them was a last minute winner. Well done Abel.

Another man blew a bugle in an attempt to encourage Wuppertal.

Yet another man stood next to me, he wore a khaki jacket and his text message alert was the sound of rapid gun fire. I moved away slowly.

A man called Schmidt scored a penalty for Kray. This came after a seemingly fair tackle which left one of the away teams players rolling around on the floor theatrically. Hey...get this...I guess you could say he was a Kray baby. It's pronounced cry. We discussed this remember? 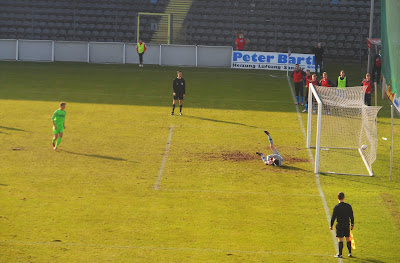 The penalty led to a number of things no one everyone wants to see in a football match:

• Wuppertal fans clambering a fence to abuse the Kray player.

• The penalty taker celebrating in front of the home fans.

• Beer being thrown at the Kray players. No, actually that one was genuinely upsetting.

In summary it was brilliant. In addition I estimate that a MONORAIL passed the ground every four minutes which means I missed around 23 monorail trips during of the game. #sadface Cheer me up, you don’t want to see me Kray do you. Come on everybody join in!

Fancy taking a virtual trip on the MONORAIL? Course you bloody do!
Posted by Kenny Legg at 16:52