Regionalliga Bayern side FC Ismaning are managed by a man called Roman Grill. A man named after a Italian/Greek multi-cuisine take away in a student area, or a Tapas Bar in London's trendy Islington if you men named after restaurants where the portion sizes are smaller and your food less of a health risk. 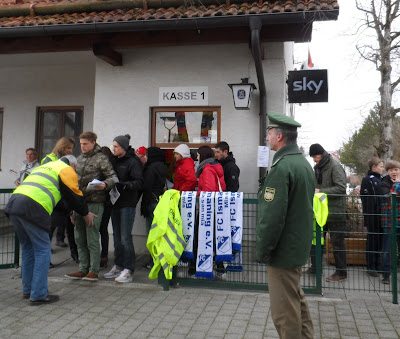 Easy where your putting those hands old man.

Roman is a busy man. As well as his daily anguished battle to put on a coat he is also an agent to, amongst other, Philip Lahm. Therefore Roman is a man with a lot on his (Grill) plate. Booo!! He's been at the club for about five months, first as Sporting Director and as team manager since January. It’s not gone well. Really it hasn’t. 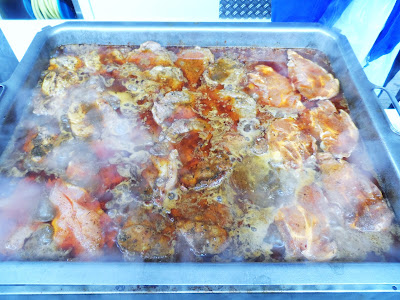 This was a big match with clearly a lot at steak.

Grill wants to focus on bringing young players into the club who could be sold at a profit. Grill is both an agent and a team manager remember. He soon upset the team by bringing in Miran Mihelic, a player he represents, as a first step towards building a Roman Empire. The players then accused him of not knowing their names when he took charge of training for the first time, despite already being at the club for two months and also criticised his training methods. Grill then suspended captain Thomas Bachinger and long serving player Bernd Häfele, a decision which was as popular as the offer of a late night vegetarian kebab. In an act of solidarity 12 (twelve) players are now on strike and refusing to play for the club while Grill is still in charge, striker Mijo Stijepic went with “either he goes, or we go” He’s not training a 16 year old team who all suck up because they’re worried about their place.” Ouch. 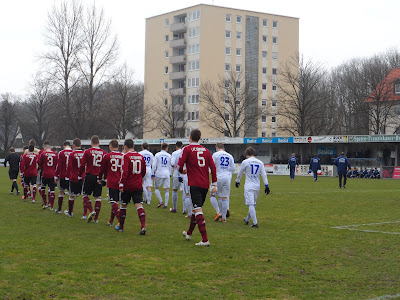 Also he’s not one so much as a point yet. In town today are the young ‘uns from 1. FC Nuremberg. Or Nürnberg. Them from that Bundesliga. Those ones. Their second team.

It's "arschkalt". It's Bavaria so everyone is elegantly dressed, except for the kid in a Cardiff City (blue) tracksuit. A couple of policemen, sporting hats made of luxurious animal carcass, mill around the entrance keeping a wary eye on a minibus full of Nuremberg fans and cracking the wise with everyone who enters. Large numbers of the crowd sport dangerously inflated puffer jackets and woolly hats balanced high on balding heads making the clubhouse scene reminiscent of the time East 17 held open auditions to replace Brian Harvey. 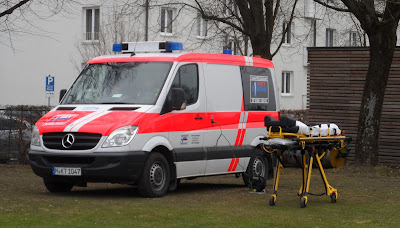 "This patient is going to die of hypothermia and needs to put on a stretcher and covered in warm blankets immediately.  Where did you put the stretcher and blankets?"
The match programme is a photocopied advert break for the half time break with team photos occasionally interrupting the commercials. The first team pose with trophies, the seconds with pride and various youth teams are organised in the time honoured team photo formation. Except one, which shows the entire team lined up for a wee against a fence.

The ground has got a roofed (ooh, fancy) terrace, an uncovered terrace where the steps are just too big to step down with a normal sized step and require an elaborate two stage leg movement to ascend the terrace, a move I demonstrated it is impossible to achieve without splashing a small, yet not insignificant, fleck of beer onto ones shoes (Boooo!). There is also a solar panel roofed VIP room (OOOOH! GET YOU ISMANING!), a Police control tower (Why?) and an incorrectly functioning scoreboard. Nuremberg’s opening goal early in the second half shifts the score line to 0-7. Sadly such numerical generosity doesn't extend to the bar and my attempts to introduce a pay for one sup seven policy was flatly refused. Their lead is then reduced by five to 0-2 when the impressive Sebastian Gärtner. I’ve marked him down here in my AiT book of football tactics and well skill players as “a little bit good”. This probably means they'll never make it any higher and I will know haunt them through a disappointing career in German tinpottery. 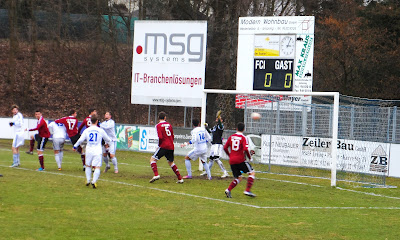 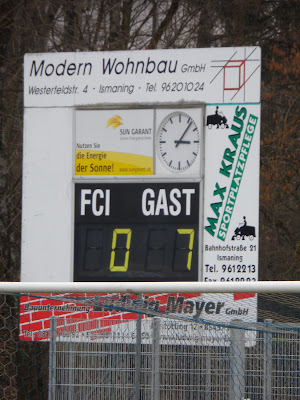 The real star of the show isn’t on the pitch. He's on the outside looking in. And it’s not Roman Grill. One man has a picture of his shiny face and his self aggrandising website on an advertising board here. The man is Janis Nikos. 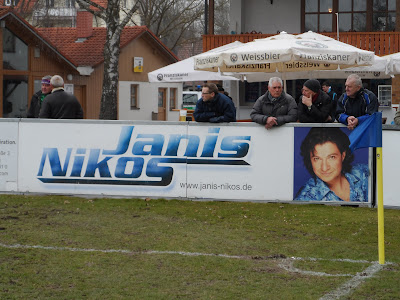 Well hello Helga, Ive been expecting you. Welcome to the pleasuredome.

My research (cursory look on Wikipedia) shows that Janis sings ear burningly awful Schlager music that dominates Saturday night German T, music that has a target demographic of "bored, tipsy housewives with dyed hair called Helga or Gertrude". Janis is almost like a kind of young Greek/German Cliff Richard if your minds dark recesses will allow you such a horrendous comprehension. 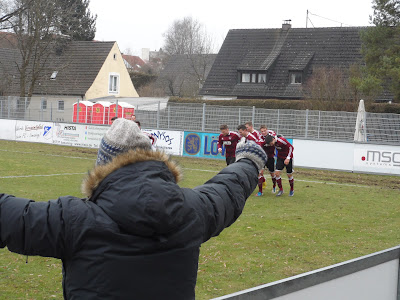 In the back office of a dodgy Greek-Italian takeaway Janis’s manager, a recent honours graduate from The Murray Hewitt School of Music Management, clearly decided to blow the entire marketing budget (37 pfennigs and half empty bottle of Ouzo) on a perimeter fence board at a German division four ground that is rarely populated by bored, tipsy housewives with dyed hair called Helga or Gertrude. With Janis threatening to go on musical strike (entirely made up by me this bit, sadly) his manager has promised to replenish the marketing budget through sales of cheaply produced Janis Nikos merchandise specifically targeted to Helga and Gertrude. Such as a Janis Nikos autographed Christmas tree baubles, Janis Nikos Spring Clips and a Janis Nikos pen knife. Brilliant. 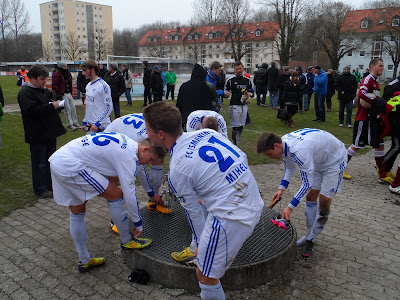 Seems like Roman Grill might not be the only manager looking for a new job soon then.

Yes, yes, I realise this is supposed to be a blog about football.
Posted by Kenny Legg at 17:15