Ohh Arminia, you're breaking my heart

Arminia Bielefeld 2-0 Rot Weiss Erfurt
Alm Stadium, Bielefeld
3. Bundesliga
Saturday 9th February 2013
Attendance: 7,211
This man, Stefan Krämer, is DSC Arminia Bielefeld manager. He looks like:
·         A young Stan Boardman *cap doff to @hartch and @wilgy*
·         A grown up Rod and Todd Flanders.
·         A permed Pete Winkleman *cap doff to @That_Bald_Owl*
·         An adult Chucki from the Rugrats with a wine gums addiction.
·         Comedy footballer Jimmy Bullard
·         The lead singer from Hot Hot Heat
·         A deflated Russell Grant *cap doff to @hartch*
·         The terrifying love child of Roy Chubby Brown and Keith Miller from Eastenders. *cap doff to @applebamos*
Stefan Krämer, who spent his childhood ransacking children’s lunchboxes for their crusts, is the man trapped in the face of a child charged with leading Arminia towards the top two divisions, two divisions which Arminia spent most of the 90’s and 00’s yo-yoing between. As a result of the on-off relationship with the Bundesliga they have a huge fancy ground, the 27,300 capacity Bielefeld Alm, and huge debts. 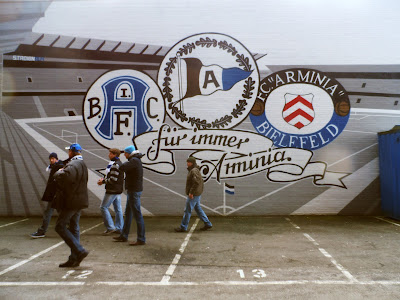 The PA plays I'm Gonna Be(500_Miles) by The Proclaimers with its well known catchy refrain, which translates into German as “I would walk ze funf hundred miles ja....but of course we have ze kilometres in Germany so zis song we find very funny ja, ah you English nah. This should be I wood walk ze 804.67km you know.” Shut it Franz. 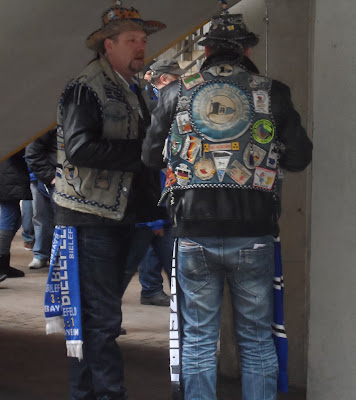 Matching hats with little football players on, coats and scarves combo. Timeless.
Travelling around 315km or 195.731926 miles to be here are the fans of Rot Weiss Erfurt. It’s just a shame they can’t decide if they’re hanging around. They’re in early, they spend ages putting all their flags up and then, just before kick off they take all the flags down. Seems like huge waste of time and erfurt to me.....heh, effort...erfurt...ahh, forget it. They then light a couple of flares which doesn’t exactly cause an excited response from the emergency services that some sections of the German press would have you believe as one policeman strolled out to have a look at the crowd while chowing down on a huge pile of mustard hiding a bratwurst whilst he is followed by a couple of firemen carrying a bucket half filled with sand. As the flare goes out so does a large section of the Erfurt following, who leave the block en masse whilst the Bielefeld fans wish them a cheery “Auf Wiedersehen”. 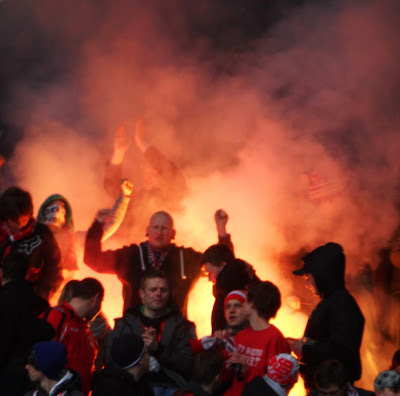 Flares never go out of fashion.
The Bielefeld fans have a range of chants, most of which seem to be separated around the various bits of the club name. There’s one that goes “Deutsche Sport Club, Deutsche Sport Club” over and over, one that goes “Arminia, Arminia” over and over and one yeah....you got it...the Bielefeld bit on repeat.  Now, if you were to tell me you know where the Arminia bit in the club name comes from you are either Ulrich Hesse-Lichtenberger  or a liar. *shamelessly copies and pastes Wikipedia* Arminia's name derives from the Cheruscian chieftain Arminius, who defeated a Roman army in the Battle of the Teutoburg Forest. Of course Teutoberg Forest went on to merge with Nottingham Wanderers to become Teutoberg Wanderers and now play in the Roman Empire Division 4 sponsored by Long Straight Roads and Viaducts.[citation needed] 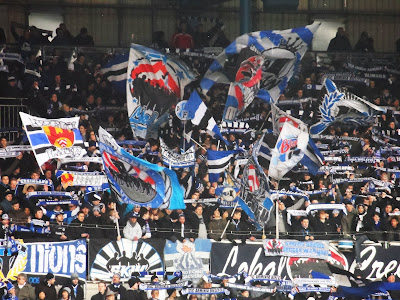 At this point the Arminia fans were flagging a bit.
The Bielefeld fans are pretty impressive and are led by the Lokal Krew Ultras, whose slogan sadly isn’t “local ultras for local people”. When not shouting elements of the clubs name in unison they also go in for some relentless flag waving and, tremendously, someone’s knocked up a home made version of an old club logo on a long stick. Not a thing with two poles, nope, just a stick (singular) and some sticky back plastic. More of this please. 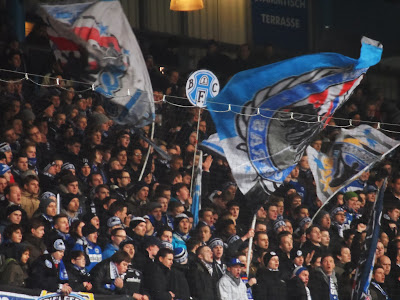 Old club logo on a stick. Tick
The fans have just finished their version of the German terrace classic “schiess ein Tor für uns” (score a goal for us) and are breaking into a song that goes “Arminia, wie schön sind ihre Tore” (Arminia, how beautiful your goals are) when Sebastian Hille makes it one nil after 23 minutes.  All the flags get a good waving while an old club logo bobs up and down a bit and occasionally bends from side to side. Tremendous. 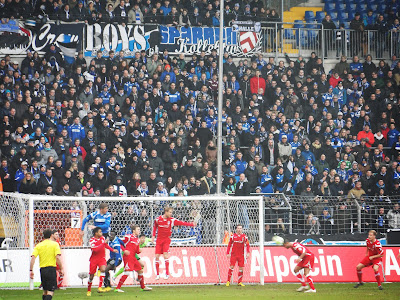 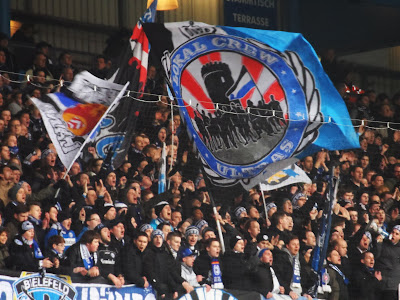 Picture of people with flags. Not shown: old club logo on a stick.
At half time the Erfurt fans reappear and set about hanging their flags up. Again. Wasted erf....forget it. They decide to make the most of their short time in the stadium and go through the entire range of scarf waving based chants and generally make a racket for the 45 minutes whilst their team offer little and concede a second from Tom Schütz on 72 minutes. 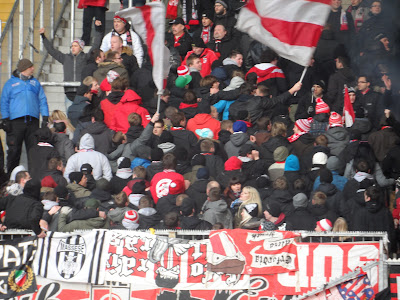 Well, at least theyre in the stadium. Other way lads! 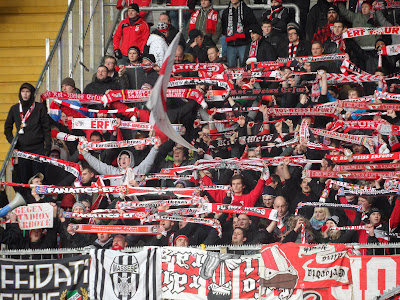 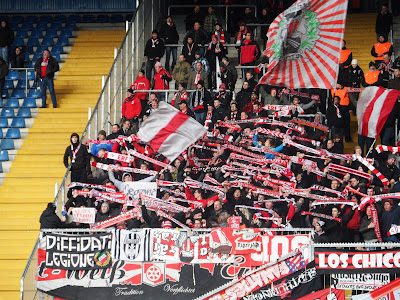 So that's that, flags are taken down of fences (Again) , flags are furled (is that a word) and a club logo on a pole is....ehh...held some more. For the Erfurt fans its time to complete the 630km or 391. 463952 mile round trip after watching 45 minutes of football. There’s only one place to make sure they fill up the tanks for the journey and that is Arminia’s very own petrol station. Of course their very own petrol station, the 12th Man Petrol Station. Why doesn’t even club have one. Discounts for members and a fan shop inside apparently. A petrol station and a young Stan Boardman in charge? What a magnificent club Deutsche Sport Club Arminia Bielefeld is.
I am taking submissions for further lookalikes; please leave your suggestions in the comments box as it gets passed around.