A Taste of The Orient.

Groups of almost respectable oiks in suits that suggest day jobs in a suburban branch of a Carphone Warehouse flex their lungs "We hate Orient, we hate Orient. A bunch of Essex wideboys in Stone Island, via TopMan, gear bellow, "we hate Orient, we hate Orient". Everyone hates Orient. These two groups of Southend fans are gathered The Coach and Horses, the only pub amongst the numerous kebab takeaways that form Leyton High Road for the match against, that's right, Leyton Orient in the *cough* prestigious Johnston's Paint Trophy Southern Area Final First Leg a Twitter word count troubling tie (85 characters renaming) that offers the victors a day out at that Wembley against some 'orrible nawthan monkeys. Or something like that. 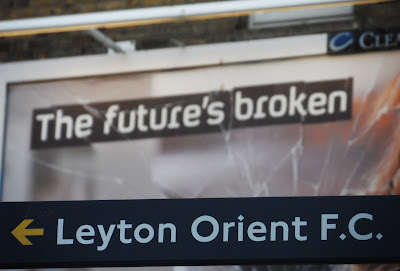 Leyton Orient F.C. our only hope for survival. 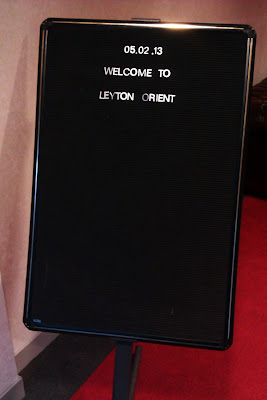 You've made it here. Well done. You're safe from the future now. Grab a Twix.

The pub's packed with fans from both sides. The pub's a relic and only a couple of flat screen TV's give an indication of which decade this is. There's no hint of trouble but there is more than a wiff of stealthy guffed kebab in the air. 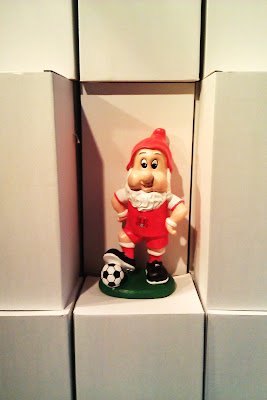 The Orient gnome. Not a big seller. 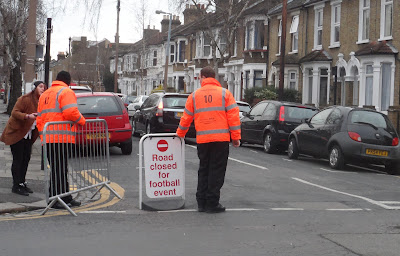 Orient's ground is a magical combination of rickety old stand, modern flats and a doctors surgery. The match kicks off with Southend fans packing the old East Stand, various cheapskates watching from their balconies overlooking the ground and Mrs. Majorie Elderflower of Waltham Forest being prescribed some heavy medication for her ongoing problems with gout. Meanwhile in the west stand one loon tries to get the Orient fans going with a brief thwacking of a drum. Well done sir. 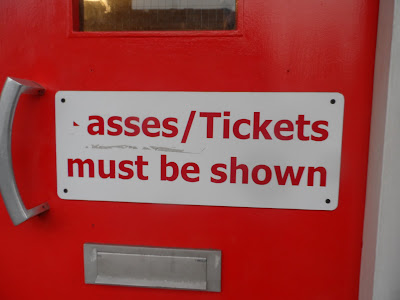 Orient are the better side, Southend have the louder fans. They continue with "we hate Orient", Orient respond with "stand up if you hate Southend". It goes on like that. For ages. It's more repetitive than a Steve Lamacq radio phone in. Southend sing, "shall we sing a song for you?" As that song is highly likely to be one of furious disdain for Leyton Orient football club the O's fan don't take them up on the offer. Why so much hate people. Can't we all just hug this out? 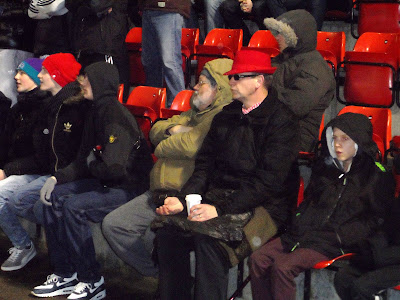 All fans adhered to Orient's strict "hats only" policy, only some were more stylish that others.

Drummer man takes a break from his thwacking to sell fanzines and he does a roaring trade; roaring as in he'll be heaving a huge pile of these unsold fanzines atop a towering bonfirey inferno as people who read words on that computer internet show no interest in his paper based wares. Which is a shame. Curse you bloggers with your fancy electronic typewriters. First you want to ruin Alan Shearers punditry career, now you're wordpressing a death notice for the ribbon and ink fanzine. Whatever next horse meat in my Bovril? Bloggers. Pah. 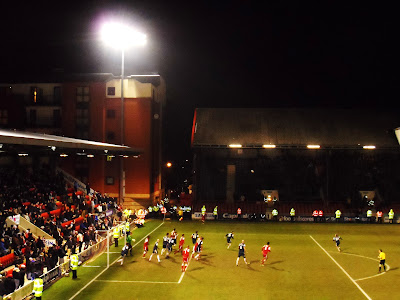 To be fair fanzine man did have tough competition for peoples attention. I don't know a football fan who doesn't like cheerleaders.*punches air* Woooh, cheerleaders.


The Orient cheerleaders are called, brilliantly, the Cheery O's which is clearly a marvellous double pun referencing the popular breakfast cereal of a similar name, Weetabix, and Orient's nickname, The Bees. All the Cheery O's have their own member name, like The Ramones and The Outhere Brothers (Dave Outhere & Geoff Outhere). Doing the splits and some pompom related guff tonight for no one's interest are Jo O, Kay O, Eve O, Yeah Yeah Yeah's Karen O, Picasso and Ricky Otto. 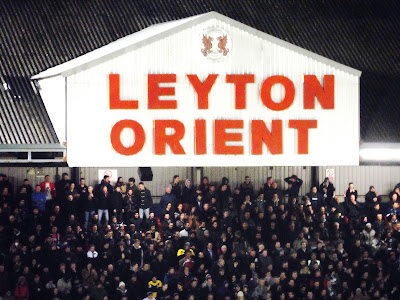 Sarfend inn'it mate. Or something similar.

The post cheerleader entertainment is two groups of eleven men kicking a modern twist on the Mitre delta around. This seems to be more popular with the 5,359 in the ground, a seasons best fact fans. Hah, facts. Southend get the only goal of the game through Ryan Leonard, they're on their way to Wembley. I, for one, wish this premonition is correct as the sight of roly poly Southend manager Paul Sturrock leading a team out at Wembley wearing the same waistcoat that he is pictured in in the match programme, presumably from the John Virgo meets the Crankies collection - available now at Matalan, would be too much for my eyes to take, a coach and horses couldn't drag me away from my illegally streamed feed of the game. And with that crowbared link back to the first paragraph another fanzine dies. 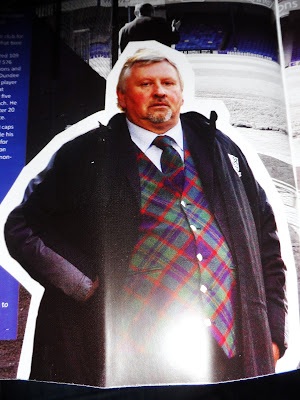 Paul Sturrock. Now so big that even cut and paste had trouble shifting this photo.

All the best to both teams for the return leg and for Mrs. Elderflower in her ongoing battle with her port addiction.
Posted by Kenny Legg at 20:40