Rheydter SV 2-3 TuS Grevenbroich
Jahnstadion, Rheydt, Monchengladbach
Landesliga Niederrhein, Gruppe 2
Saturday 17th November 2012
Attendance: 70
German football is a world of packed terraces populated by men stuffing bratwurst and beer into themselves and watching glorious football. Not as Rheydter SV it ain't. It doesn't need any of that frivolity. It's better than that. It's got huge grassy terraces. It needs nothing more. 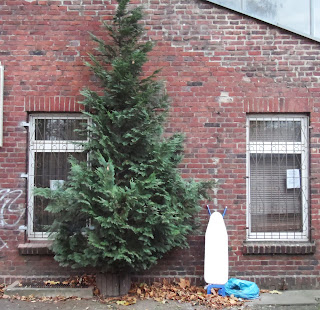 The purchase of a cheap roll of sellotape leads to the unravelling of wrapping paper to spoil the christmas surprise for one unsuspecting housewife.

But it's got more. It's a show off. Out the front of the ground is a nightclub.. Inside balloons are being blown up and a buffet is being laid out while a low budget DJ sets up to create the muted atmosphere on a Working Men's Club. A nightclub. My christ I love this place already. 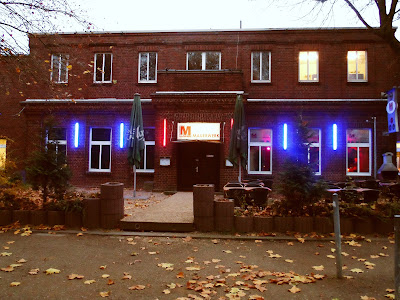 Behind the Jahnstadion is the home ground of Borussia Monchengladbach's second team. I wandered in, noted the generic stand, noted the generic running track, noted it was a bit generically boring, noted that I turned on my generic heels and then noted my eyes launched out of my head. It's only a mega flipping scoreboard, well hello. Not just any old mega flipping scoreboard but the scoreboard from the old Borussia ground. Massively out of place, massively massive. Marvellous. 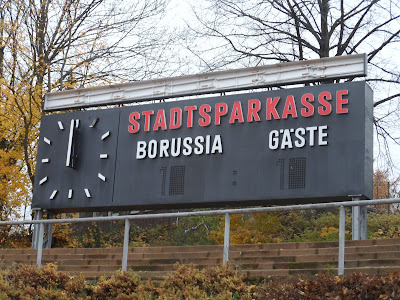 Next to it, a classic German “aschenplatz”. A pitch made of volcanic dust that shreds the legs of anyone dimwitted enough to attempt a slide tackle. Today's big match pre match entertainment was a kids match, which concluded with some frustrated weiner kid booting a drinks bottle and then being hoofed by his Mother. Football needs more Mother kicking players. The “Kick Mothers kicking players into football”campaign starts here. 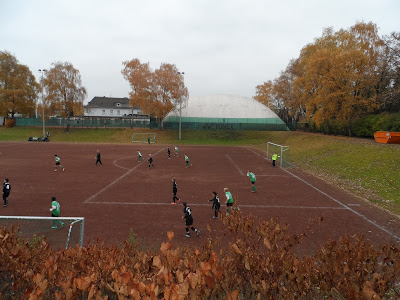 This photo suggests that I was hiding in a hedge watching kids football. I was.

This is then followed by an “alte Herren” (old boys) match. Think shirt stretching stomachs, think haircuts styled on Jim Smith and think much hilarity. Pacey counter attacks aren't an option and crunching tackles are avoided due to the real danger of clattering an arthritic leg or busting a hip replacement. Half time isn't a time for a tactical rethink it's time for a drag on a cigarette and an alcoholic drink. It's dusty brilliance. 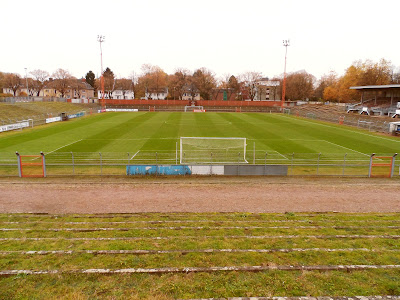 The Jahnstadion ground though. Built in 1922, with nothing done to it since. Previously with a capacity of 40,000, now reduced to 20,000 and today playing host to a German 6th division match in front of 70 people. Don't worry Janhstadion, I still love you. The terraces are vast and they dwarf those few spectators. These aren't just any old terraces but huge crumbling, grass covered terraces. I bloody love overgrown grassy terraces. 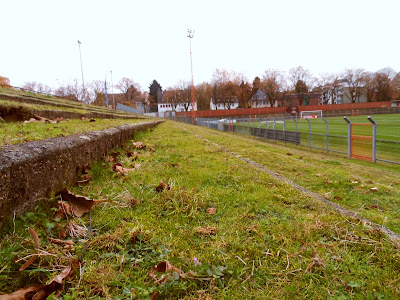 Yes, I was lying on the terrace.

The players enter the field to a cacophony of noise. That noise being the sound of 22 exhausted old gimmers wheezing their way across the terrace, into the changing rooms whilst whacking their boots clean. One person applauds the teams onto the pitch, . one chap walks into the ground carrying three bags full of shopping (“Yeah, um.....sorry I’m late home Frau, the....eh....queue in Aldi was massive.....ehh... *tugs collar, mops brow, shuffles awkwardly*) and a rabbit (ground) hops around behind the goal. 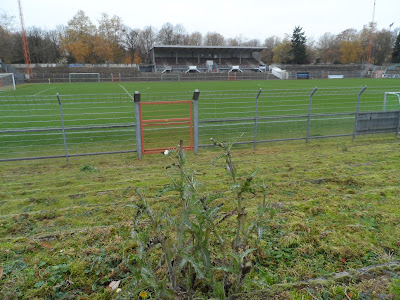 This blog is providing you with a good weed. 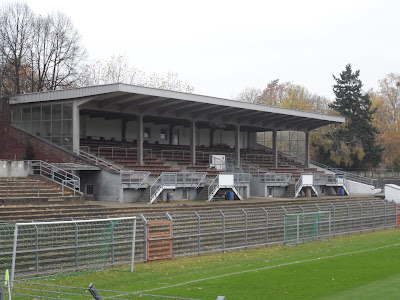 So, 70 people. In a ground that can hold 20,000, a calm relaxing Saturday night watching sixth division German football. Great. Even here, in this grassy loneliness someone decides it’ll be a good idea to bring a drum and dribble into vuvuzela. Oh yes, that’s just what this peaceful situation needs. Actually, I’ll let them off. These 5 nutjobs did also have one of those horn things which makes a sound which I can only describe as “eastern European football during the communist times, as heard on clips on Grandstand ”. Now, I’m not an expert of sports psychology and motivation techniques (really, I’m not) but I’m not convinced that one man thwacking a drum while another tries to herd non existent livestock is really going to spur the home side on. Not that I care to be honest, I’m busy filling up another gigabyte of memory card with dimly lit photos of a luscious grassy terrace. 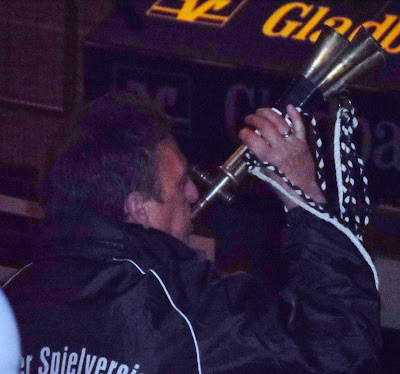 Sadly though I have to report a fundamental law of Germany was broken. Article 407a of the German constitution states “When a group of more than four people gather in one place for duration for more than six minutes someone must be appointed to sell beer and bratwurst”. I would have vigorously instigated legal proceedings for violation of my basic German human rights if I wasn’t busy developing an uncontrollable lusty crush on this herbaceous wonder. 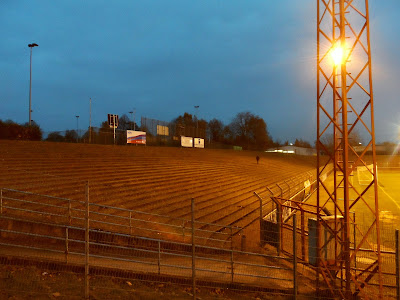 The loneliness of an away fan. 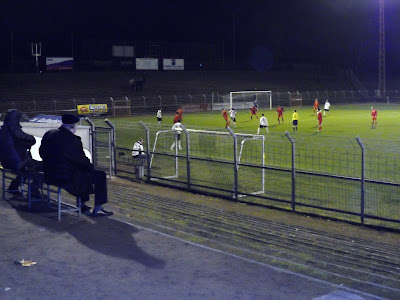 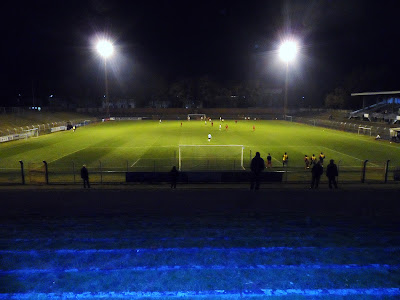 The view from my new home.

Can you marry a football ground? Legally? Illegally even? I mean I would if I could. I could build myself a little den here made of twigs and leaves couldn’t I? No one would see me. I’d be so happy. We’d be so happy. Live on the terraces? What a life. I will befriend the rabbits. The ash pitch will become my child. Stroke the grass late at night, watch it change with the seasons. Sing to it, stroke it, smell it, hold it. Be as one. March around the terraces bare chested with a crown made of thistles. Me King Groundhopper Chief Man!! OK, there is no food and water here but I could survive that. This could work. This could actually work. I’m going to live here. You’ll come and see me at Rheydter SV won’t you? Say you will. It’s great here. I’ll let you meet my rabbit friends. Please come.
Posted by Kenny Legg at 13:17