Find somewhere to live they said. Register with the authorities they said. Declare yourself as a foreigner in the country they said. Grow a mullet so you fit in they..eh..actually, that was me who said that. All those things can wait. There's a 9th level title decider to be watching.

This game is not just tinpot. It's beyond tinpot and beyond that again. Uber tinpot if you will. I've seen uber tinpot before, course I bloody have and there's one clear, delightful, sign you're in it's company; the reluctant club linesman. 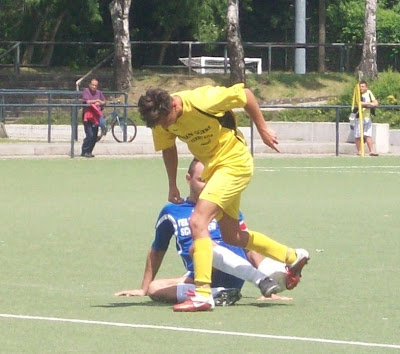 TuRu's lino is a man who appears steadfastly Copydexed to the railings. His ambition to influence play as limited as the likelihood of him donning a pair of skinny jeans. From his position on the half way line he occasionally flaps the flag in a way the referee deems fit to ignore. Any unexpected attempt to keep up with play would send his precariously balanced jeans into a rapid descent from his gut stopping only at the, wildly inappropriate given the body mass above them, word “Sport” written boldly across the back of his trainers. 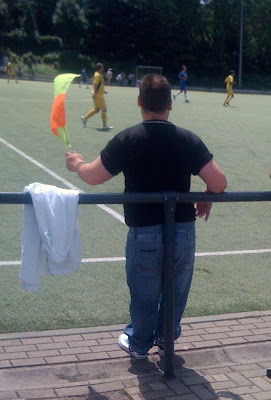 Put some effort into it man.
A looping header after twelve dominant minutes sees a tremendous bundle celebration from TuRu III. Their keeper sprints the length of the astroturf (I've never smoked astroturf) and they're totally in control, set for the win that would give them the championship.

The SC 99 linesman's afternoon is equally as futile. One attempt to indicate a throw in is overruled, resulting in a mumbled rant and a hilariously petulant swirl of the flag. His biggest challenge is to avoid his own team's manager. The Adidas clad boss marches along the touchline, shouting orders then ducking to watch play from ground level, crouching like a coiled Andre Villas Boas on a disappointingly animal free hunting safari, until finally being ordered, by the man who's in sole charge of proceedings, the referee, back into his dugout. 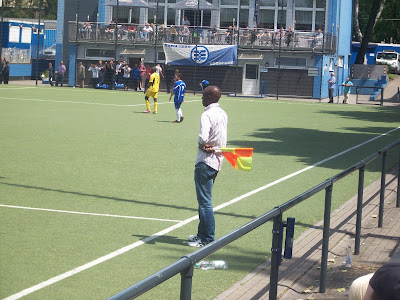 Back in the dugout he joins a man who looks like what would happen if I asked you to draw a stereotypical German man on a rain soaked English seaside summer holiday called Rudiger.  Which I am. Draw me Rudiger. 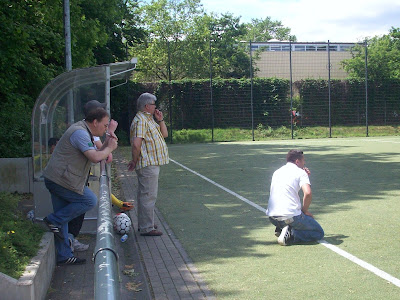 The ground has a few small terraces, two tin huts full of giggling school girls (they told me they were 18 your honour) and a man sat on a tree stump. Now I'm a huge fan of people watching football amongst foliage, see here for further proof and here. Told you. This means the ground is a brand new entry into the AiT top 10 grounds of all time. I know. Really, a bold decision. But, wait eine minute bitte. What's that high up behind the goal offering a shocking view of the game from behind two wire fences? A sun trap beer terrace? Oh well played Turu III, very well played indeed. Congratulations on making the top 5 AiT grounds ever. Part II. 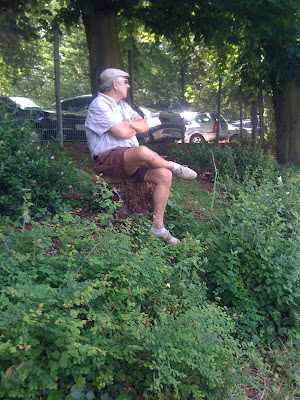 Tree-mendous posture. *groans all round* 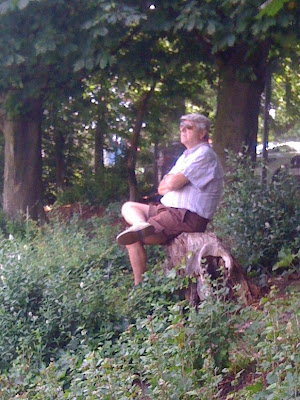 Uber tinpot also guarantees the presence of, at least, one fat player. That player should always wear the number five shirt. This is an uber tinpot fact. His elasticated shorts must be on the verge of bursting causing an immensely satisfying elastic twanging noise and his socks must be stretched up high to expose on the tiniest glimpse of two fat knees. Aforementioned number five should waddle around the middle of the pitch, occasionally playing a decent pass and more occasionally twatting a much quicker, more skilful opponent before pleading with the referee to avoid a booking. TuRu's number five ticks all these boxes before asking if they're made from edible sugar-paper and requesting a Euro for an ice lolly as he wheezes off at half time. 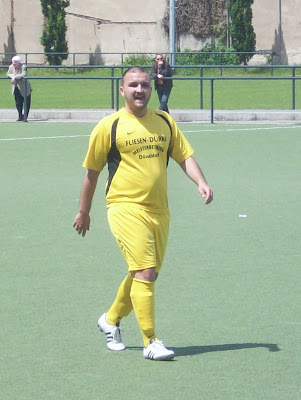 Those two bumps on your stomach really are impressive.....and possibly a cause for medical concern.

By the time SC 99 equalised ten minutes into the second half, sending their manager sinking the 27cm from his creaking haunches to his knees, I was halfway through a frosty German beer. Throughout the second half my arse remained royally wedged on a sun lounger as the game, which I could barely see due to the two layers of maximum security fencing before me, concluded with Turu III missing out on promotion to the Bezirksliga and with two underused linesmen ran straight into the changing rooms to apply lashings of after-sun.  I'll be honest, I had a great afternoon. I was as happy as a tipsy pig in scheisse with my first trip into German uber tinpot.
Posted by Kenny Legg at 17:08