Another night, another dream but always TuRu.

The reason being that a man in a black suit has interrupted the pre match handshakes to hand out flowers from a bucket. TuRu II's manager Georg Müffler gets some (of course Georg Müffler) before his last game in charge. Half the team get a bouquet. I didn't get any though. 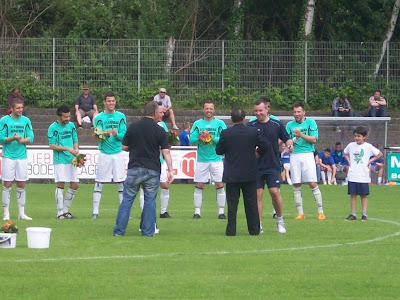 Where's my flowers TuRu II? You don't call, you don't write, you don't take me out to Wetherspoons on Steak night anymore. *shakes head* Why TuRu II, why?

A win here and a defeat for SV Uedesheim would mean that TuRu II win the Landesliga championship. However they wouldn’t be able to obtain promotion to the new Oberliga due to their first team playing in that league already. Hard lines Müffler. 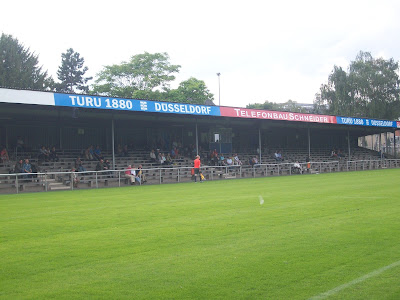 As wooden as the acting on Hollyoaks.

All along the wooden benches that span the length of the main stand are 1,200 carefully stencilled seat numbers. Numbers that have been painted in hope, mixed with a splash of black paint, that there might be the need for an all ticket game in this 8,000 capacity ground one day. 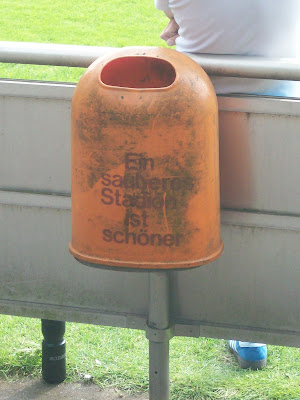 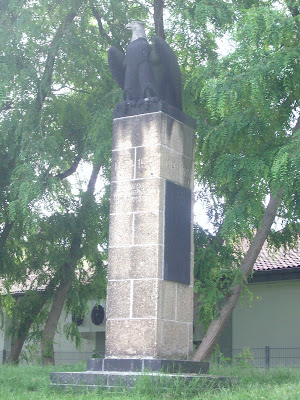 Taking up about fifteen of these numbers are a group of snap happy Japanese folk. Every move of the SC West right back is tracked by at least two long lenses. He stands around watching the game, flashbulbs shimmer; he shuffles forward, snappy snappy; he gestures to a defender, that’s a Kodak moment. He makes a tackle, nothing. He runs forward with the ball, lens caps are replaced. They're seemingly not interested in any photo that might show that he’s actually participating in a game involving 21 other players as that'd be fresh madness. 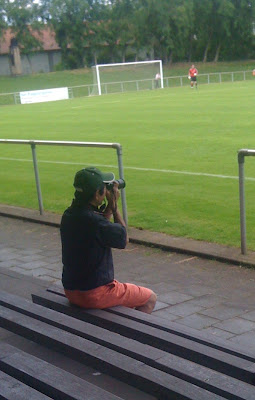 Yes. I've taken a picture of a man taking a picture, what of it hey?

Not a great deal happens in the first half. TuRu II play balls up to a number nine who should only ever be described as “burly”. SC West knock it around patiently and the only thing that rouses the non Japanese members of the crowd comes after 25 minutes when a hoofed clearance bounces back into the stadium, narrowly avoiding de-railing the passing 15:19 tram to Benrath. Still, if the tram did get shoved off it's tracks at least we’d be able to rustle up some condolence offering flowers at extremely short notice. 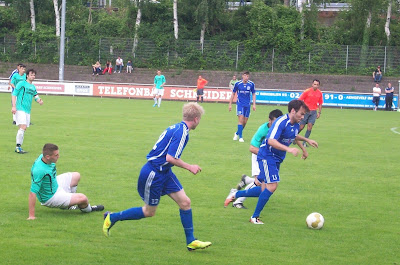 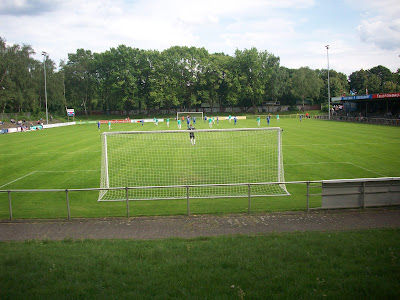 One for all you groundhoppers out there.

In the corner of the ground there's an outdoor bar pumping out tunes and serving beers and bratwurst. This is obviously targeted at those who are pathetically alcohol dependant and can't go a mere 45 minutes without a beer, those who are too gluttonous to cease devouring food for a short period of time, those too asinine to be entertained by a championship deciding football match and who's brains require sating with idiotic pop music and intoxicants.

So, here's a list of the songs I merrily bopped along to while supping a couple of delicious ice cold beers and shovelling a flavoursome bratwurst into my gullet during the first half.

Run DMC vs Jason Nevins – It's Like That
Britney Spears – Baby One More Time
Eiffel 65 – Blue (Da Ba Dee)
Dario Gradi – Carneval de Paris
Unknown German rap nonsense
The Drifters – Every Night Is Like A Saturday Night
Men at Work – Land Down Under.
Survivor – Eye of the Tiger


Some great tunes I’m sure we can all agree. And here's a handy Spotify playlist to help you re-create that magical German 6th division atmosphere at home. I've replaced “unknown German rap nonsense” with Another Night by The Real McCoy, an often overlooked German treat from the 1990's that definitely isn't nonsense. It's some deep shit.

“Just another night, is all that it takes,
to understand, the difference between lovers and fakes “

See. Deep. It scores an impressive 8.4 on the AiT deeplyrics-ometer, putting it just behind Sweat (A La La La La Long) by Inner Circle. 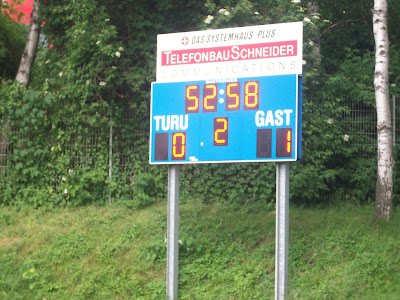 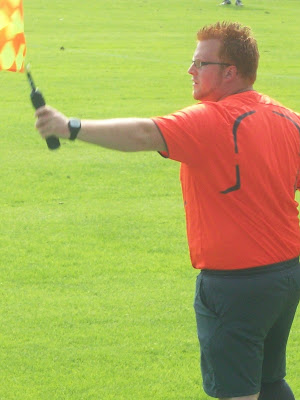 Of course hefty linesman with glasses. Why not?

Surveillance on the left back continues in the second half, his every move tracked from every terrace by sinister spooks. There’s no reason to take a picture on 68 minutes as SC West players celebrate Marco Michalzik scoring their second goal in fifteen minutes. TuRu II are crestfallen, the players are dead on their feet and their chances of winning the title, much like the popularity of The Real McCoy, slips away rapidly. 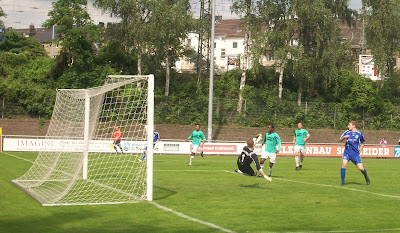 Your actual third goal being scored right there. 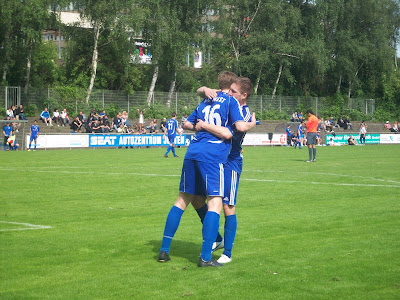 Your actual goal celebration right there.

A sound resembling a scream of elderly crow with a throat infection that is being viciously violated is played out over the tannoy to greet TuRu II scoring a penalty, however the horrendous noise can't inspire a comeback. SC West score a deserved third leaving Müffler’s mens title challenge laying, like a bouquet of petrol station flowers presented to a heartbroken lover by her philandering boyfriend, in tatters. 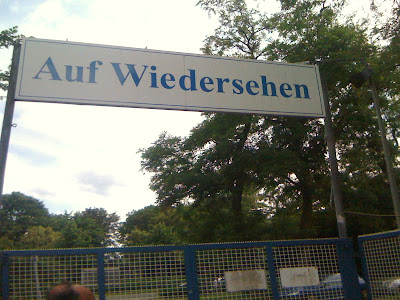 And with this sign this blog ends. If only I knew what this sign meant.
Posted by Kenny Legg at 16:19