Nearly a D:ream start to the season

It's the long awaited day. The magical day. The one you've been crossing off days in the calendar in anticipation since it was announced, the day you thought may never come but it has. It's here. It's true. D:Ream are finally playing Weymouth. 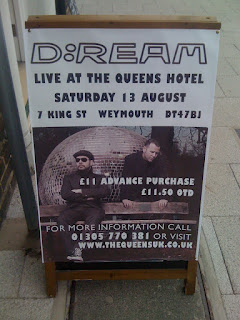 You are witnessing the pinnacle of a career here.

The D:Ream. The 'Things Can Only Get Better' D;Ream, the D:Ream that invented text speak via there 1994 number 3 chart smash 'U R The Best Thing'. That D:Ream. Playing Weymouth has to be the undoubted pinnacle of any bands career. Let Loose sent the crowd wild here, Mr Blobby's career peaked when he headlined the resort and Toploader, well thankfully they cancelled.

Oh, and the football season starts.

The symmetry between D:Ream and Weymouth FC are startling: both have seen better days, played in front of bigger crowds, have seen players go on to better things, (D:Ream fact – Prof Brian Cox was in the band), both face uncertain futures and both have an entrance price of £11. Bargain. D:ream have never played (twice European Cup winners) Nottingham Forest though and rumours that Rob Wooleaston had a pre season trial for D:Ream have been denied by the player. 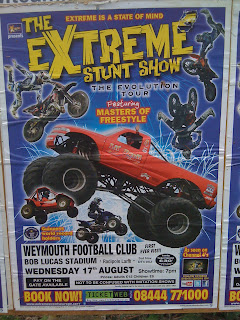 Amanda Rolls has quickly to bring in a couple of kitchen hands to help her be (imaginary) Chairman and signed up Mrs Susan Rolls and Mr Edward Brennan Rolls to join the clubs board and gave them special duties for (imaginary) vol-au-vents and (imaginary) prawn rings respectively. I would like to welcome them both to the club. No, I genuinely would, I doubt they"ll ever see it.

With Amanda busy thawing an (imaginary) Vienetta it's left to George to greet our guests from Cambridge, sadly he chose to represent our club while looking like he's just turned up at the ground straight from a two day Hooch and Fosters Ice fuelled binge with Toni Di Bart. 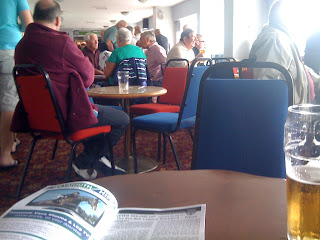 Pre match atmosphere doesn't get any better than this.

The pre season optimism has got to me. Add in the excitement caused by one of 1994's best Irish bands, with a colon in their name, being in my home town and my brain was in danger of leaking out of my ears. Today's the day, together D:Ream and Weymouth FC can grow again! D:Ream, you will have another number hit, you will win that Best Dance Act award at the MTV Europe music awards that you so cruelly lost to The Prodigy in 1994; Brendan King you will lead us to Dorset Senior Cup victory!

3 seconds into the match and we start the season by thumping the ball straight out for a throw in, which leads to an attach that culminates with a Cambridge shot rattling the bar and I start to realise that my D:Ream induced optimism might, like a mini scotch egg in a jelly, be massively misplaced.

23 minutes later Weymouth's goal machine Warren 'Wozza' Byerley heads us into the lead with a great header and we might as well be handed the league trophy now. We are gonna piss this tinpot league! 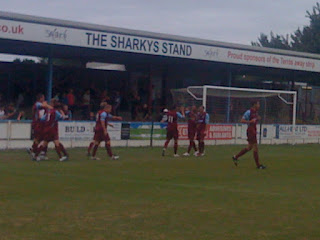 The crowd in the Sharkey's stand go wild.

Shortly after things get even better as familiar traditional terrace traits are shown to have survived the summer. The Barbara Windsor stand gets it's first opposition player of the season booked. A fairly innocuous shirt pull is met with howls from the Babs which results in the ref dishing out a yellow card and means the Babs stand has now secured more bookings than D:Ream in the past 10 years. 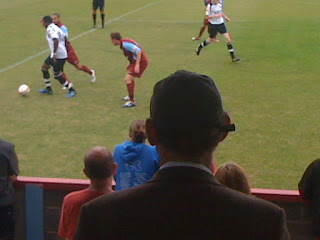 A doff of the AiT cap to manager Brendan King, who watches the match from the directors box, due to a touchline ban, and chose to do so in full Weymouth FC training gear, including shorts. Shame we couldn't get him a Phil Brown style headset mic though, or even give him a bendy straw, or cotton bud taped to his ear so it looked like, from a distance, that we could afford some high tech gadgetry.

The half time score announcements bring another first of the season, with the inaugural hearty cheer for the fact that Dorchester have made a n:ightmare (see what I've done there!) start to the season and find themselves three down. Pah, losers! The music fades out as substitute Kyle Bassett goes through his half time warm up routine, which consists of queuing up to get some chocolate from a refreshments hut in the ground, while dressed in full kit and boots. 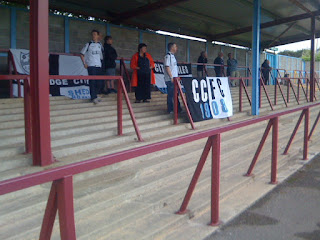 Sadly other traditions have lasted the summer, the tradition of being a bit dodgy in defence and the tradition of losing. Some poor defending cost us two goals that sent the 15 or so Cambridge fans (roughly the same number of people who bought the new D:Ream album, possibly) and despite a late fightback we, like D:Ream, aren't able to launch a successful comeback. There was plenty to be pleased with from this performance, the squad lacks a little bit of quality in depth and defensive errors need to be eradicated but there were plenty of positives to take from this performance against one of the title favourites.

Yes! I didn't make the obvious 'Things Can Only Get Better' analogy!
Posted by Kenny Legg at 15:01