"3-2, 3-2 now!! Penalty. Five minutes left" Wherever in Bristol's tinpot lands you are you're never that far from someone shouting out the Rovers score. That's certainly the case here and you get the feeling a large amount of the Yate support are here as 'The Gas' are busy spoiling AFC Wimbledon's party. 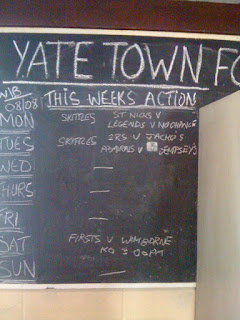 A busy week ahead at Yate Town FC
As kick off approaches the Rovers faithful slowly drift in. The soporific sun, the lure of frosty pints and the threat of a dull and pointless friendly means enthusiasm levels are muted. Some of the Chippenham support are more animated however. A nearby chat with with summer signing, Aaron Wilson, reveals he has signed for Chippenham after 2 years away working on cruise ships around the Caribbean! Keep your multi million pound exotic summer signings, shove your extensive South American scouting network because whatever you've got isn't going to trump Chippenham's signing of a man who has been living in a cabin on the high seas for the last two years. 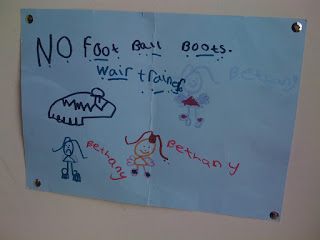 Good work Bethany!
Yate are taking this match seriously. Very seriously indeed. They've blown up the inflatable ice bath! A doff of the AiT cap to them for embracing sport science and having an inflatable ice bath, but I'm struggling to envisage an overweight seasoned non league bruiser defender wanting to jump in an ice bath on a cold Tuesday night after a gruelling match against Stourport Swifts. Also, they tend to work better when filled with ice. 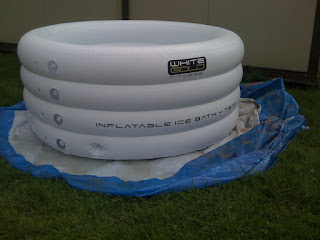 The Yate Town FC birthing pool.
For the first twenty minutes nothing much happens, bar the occasional baahing of sheep in the adjacent field and the Chippenham keeper impersonating a vociferous Supervisor of an orange juice pressing factory with constant shouts of “Squeeze!!” The match, in the summery Bristolian suburb, is enlivened when (**weak orange juice related gags alert**) the keeper is rudely awoken from his tangerine dream, as a complete lack of concentrate on his behalf means he fails to (vitamin) see a long range shot until too late, leaving Chippenham a goal down and Yate in a state of sunny delight. 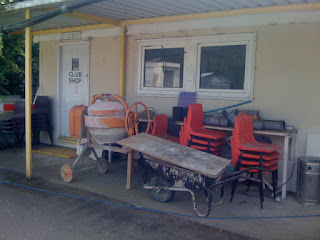 The Yate Megastore. Closed for a concretey refurbishment.
After forty five minutes, and with the scoreline now 2-1, the half time whistle is greeted in the usual style – the playing of Green Sleeves. An ice cream van has suddenly appeared in the car park, staffed by a man sporting the classic ice cream salesman look of faded vest and straw hat. This man shuns the school fête, a kids playground, the end of a pier, anywhere else that would have provided conditions conducive to people wishing to procure a Calippo. This man sees a gap in the market for selling Mini Milk's to those 99, or so, middle aged men watching crap football. However, the selling of approximately 2 Mr Freeze's suggests he might want to re-think his business plan. 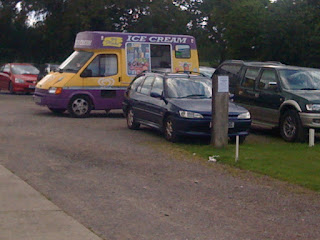 Busy day mate? Nahhh...not really.
Further proof of how serious Yate are taken this is offered by the fact the subs aren't trusted to do their own warms ups. The coach's encouraging shouts of “ nice and sharp aye” and “quick on the turn” are met with a lackadaisical jog from the subs and “give your hammy's a stretch” results in a bit of apathetic leaning. 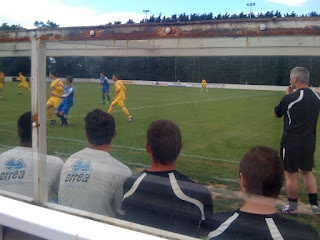 Token match shot
On the pitch Yate suffer a setback as Chippenham re-equalise, Dave Gilroy scoring a great header. Off the pitch things are starting to get serious for Yate. The half time draw winner still hasn't presented themselves and the winning ticket number tannoy announcements are getting increasingly desperate.

A final, pleading, call for ticket number 2564 results in an young, attractive blonde Chippenham fan being introduced to the draw organiser by a steward with the words “he'll know where to take you” The announcer, with thick northern accent, and dressed in one of those shirts only worn by men in Working Men's Clubs and darts players, can't believe his desperate pleading has presented him with such a fine filly and responds with the slightly disturbing line of “I know where to take you....I know where to take all the pretty girls.” The re-appearance of them both, about thirty seconds, later suggests nothing more extravagant than an exchange of a box of Cadbury's Celebrations took place. 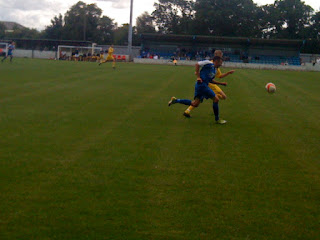 Chippenhams's big summer signing from Brittany Ferries, Wilson, left his substitutes bench berth at half time. Launching his appearance at right back and continuing his nomadic lifestyle by calling at the ports of right wing, left wing and finally docking just about anywhere he fancied.

The good work of Wilson, and his shipmates, was sunk by the Chippenham keeper whose continued failure to catch a ball, this man would struggle to even grab an Outspan (small ones are more juicy naturally) means that Yate are able to score a couple more without reply before the end. The final whistle sees a sprint for the bar, to see how many Bristol City have lost by, as both the ice bath and the returning ice cream van remain unused.
Posted by Kenny Legg at 10:52