Everyone knows that Germany was re-united as one because of the intervention of David Hasselhoff. I’m sure we all recall where we were on 9th November 1989 as we watched grainy footage of The Hoff ramming a flaming, out of control Trabbi through the Berlin wall, sending thousands of mulleted Ossi’s scurrying into the west, before playing a triumphant one man band show atop the rubble and planting a smacker right on Mikhail Gorbachev’s love bite whilst Nena released 99 red balloons into the free world air.

The Hoff granted us our freedom from our oppressive DDR overlords so we should embrace it. It also meant today was a bank holiday and there was only one obvious way to mark 22 years of beautiful German reunification and that was, obviously, some two bit (current exchange rate - two Euro cent) local cup match at 3pm on a miserable Wednesday afternoon. In your face Lenin! 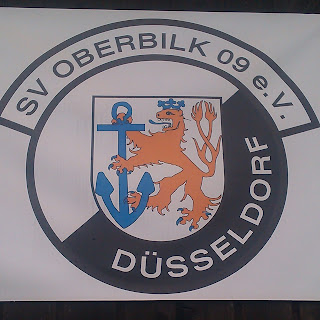 As far as I can work out the SV Oberbilk club logo is of a highly embarrassed fashion conscious/cross dressing dragon with a series of terrible split ends, wearing an ill fitting crown, with badly painted toenails who has just eaten an raspberry Mr. Freeze in celebration of successfully unmooring a boat. If that’s the look the designer was going for then he/she has really nailed it.

Now, put your coat on, pick up your groundhopper carrier bag, and join me as I take you for a wander round the ground. A wander because we are free. Free because The Hoff fought those dastardly evil commies for us. 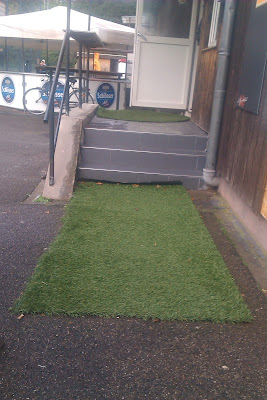 Sod the red carpet, SV Oberbilk 09 obviously knew AiT was coming and have rolled out the left over strip of astroturf (I've never smoked astroturf) to welcome me from the bar and into the ground. 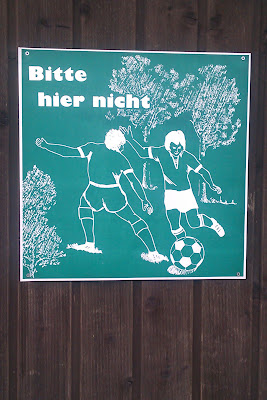 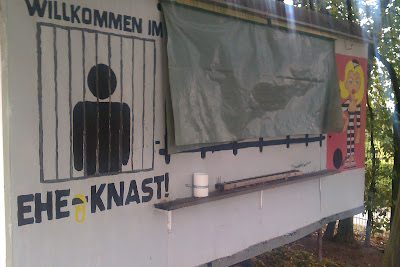 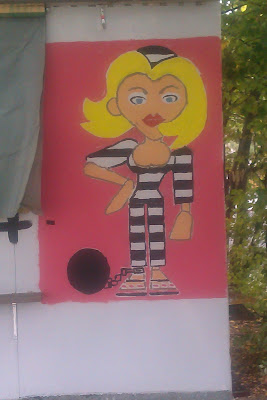 I snigger past the trailer that offers no purpose other than comparing marriage to being a prison and offering an outlet for a frustrated painter stuck in a loveless union. Why this is here is anyone’s guess. 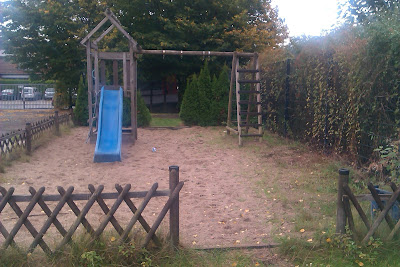 I, and this blog, are often being accused of being childish and not focusing enough on the actual football matches. Well that is something I LOUDLY protested against as I went head first down the slide in the playground INSIDE THE GROUND!! Weeeeeeeee!!!! Lalalala I DONTUNDERSTANDTACTICS! CANIGOONTHESLIDEGAGAINPLEASECANICANICANIPLEEEEEEEEAAASSSSSSEEEE?? 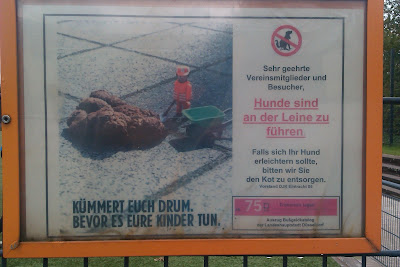 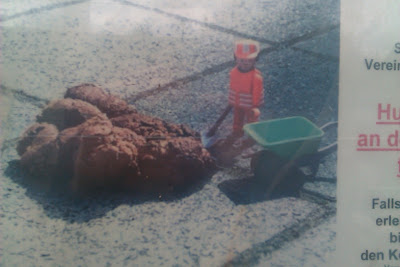 Something I've never accused of is having a big steamy dump in the middle of a terrace. Now, my German isn't great but I'm pretty sure this sign says “Shit where you like chaps, we've got a team of Lego men out the back who will come and clean it up. Defecate your best.” 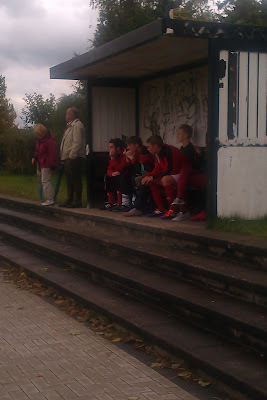 It’s guffawing time as I walk past the Rot Weiss Lintorf subs looking supremely bored in their main stand/dugout/bus stop. 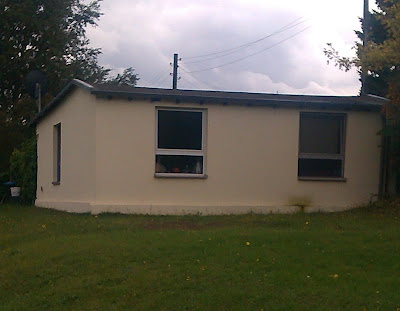 Houses with views into grounds is always a winner. (Horses with views into grounds - also good) Oberbilk goes even further with a house that, not only backs onto ground, but has a gate that leads straight into the ground. Honestly, if I’d wanted to (I did want to) I could have let myself in to use their toilet facilities (apparently my German understanding was wildly inaccurate. Awkward) and stolen their patio furniture on the way back into the ground if I'd wanted. (I did want to) 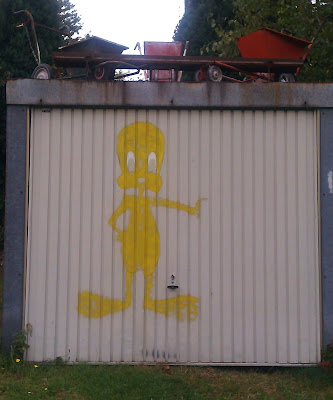 Ah the great terraces of football. “In the second half Liverpool will be kicking towards their passionate fans in the famous Kop end”. “For those listening on the radio Aston Villa are being roared on by those in the Holte End as we kick off”. Pah. Whatever. “In the first half SV Oberbilk Düsseldorf 09 are attacking the hand drawn and badly painted Tweetie Pie Garage Door End.” 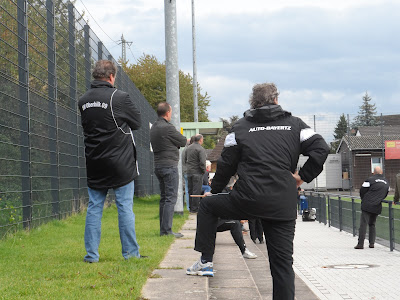 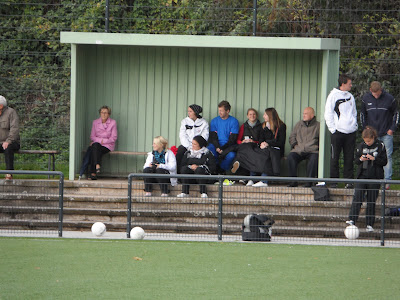 Laughter/pity are the emotions as the SV Oberbilk management team are relegated to standing on the terrace, barking orders at their players, as a group of teenage girls bully them out of their main stand/dugout/bus stop. 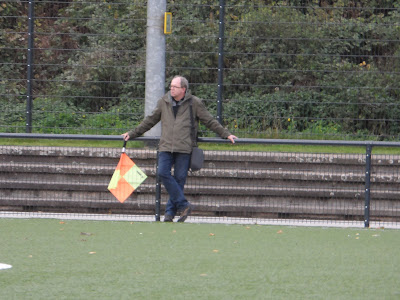 I very nearly pissed my sides, when I realised the volunteer linesman was wearing a manbag precariously teetering on one shoulder as he runs the line. Surely the cross body approach would have been more secure here? Thankfully this languid approach to officiating means the words “run” “the” and “line” were not needed at all two sentences back. That bags not leaving that shoulder anytime soon. 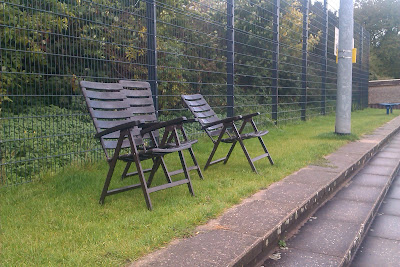 I decide to stop for a rest, I’ve earnt it, on one of the three sun loungers placed in the ground. In an unrelated story just days before I turned up the Muller von Beckenbaur family, who live at the badly painted Tweetie Pie Garage Door End, made an emotional appeal for the return of their treasured three sun loungers. 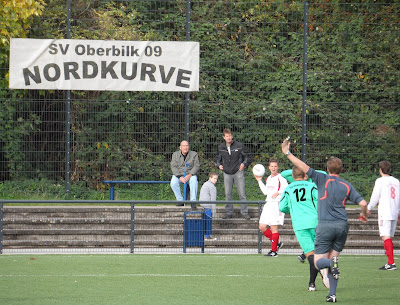 I’m not an idiot. I cower down and tiptoe past the feared ultras of SV Oberbilk's Nordkurve; I can hear them mumbling something about threatening the referee with an ice pick for another erroneous decision. 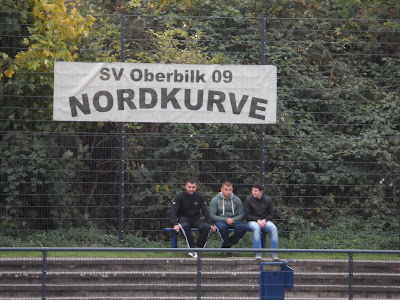 Once retired to a safer part of the ground look back at the ultras, only to realise they have changed into THREE ENTIRELY DIFFERENT PEOPLE. Things like that use to happen in Communist times I’ve heard.

Finally I re-enter the bar for an Alt bier. Turns out most of crowd are in here anyway, watching through the window at the numpty taking pictures of deckchairs and probably making notes on my movements. Old Stasi habits die hard it seems. 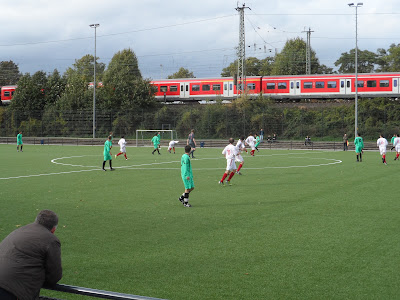