Behind the scenes at AiT


A lot of work goes into every Adventures in Tinpot blog post. I remember a post once that took almost 17 (seventeen) minutes to write.

It's not all searching Google to help crowbar in tenuous links to 90's pop music, or scouring the internet sites of the clubs involved to allow me to chuck in quotes from to American TV shows and I very, very rarely even look in the programme for players with mildly chucklesome names. Oh no.

Often at games people stop me and ask alliteratively asinine questions like “do you think Velbert manager Lars Leese was a fan of Let Loose” or “do you think the recent change in luck of SSVg Velbert's 21 year old midfielder means that everything is coming up Mühlhause” and, most inanely, was I aware that SC Verl have a player with a called Alaaddin? Such frivolous questions would have been most unwelcome today as I am here with the sole intention of writing a captivating piece of this mid table German 4th division regional match.

Many of you have been sending in letters, and while I do read every one it is not possible to reply to you all, asking if I could shed some light on to just how each blog nugget is crafted. In a special, one off never to be repeated (it might be repeated again) treat I am going to give you a glimpse behind the scenes of Adventures in Tinpot.

First it is important to take a lot of accurately spelt notes on every aspect, of every minute, of the game and don't let off the field incidents, such as music, noises in the crowd or animals sniffing each other distract you. My notes from this game show I am a master of following the above advice.

It's also important that you take cleverly shot photos that capture the hectic pace of the game against the backdrop of the fervent crowd. Be sure to check your apertures and your depth of field so that you produce photos that are really going to appeal to your audience. I am delighted to show you, through the photos below, that I have successfully followed this advice and delivered another supreme blog.

It's also important not to drink lots of cheap German beer throughout the afternoon, on the way to the match and during the game if you want to write a comprehensive match report like mine. 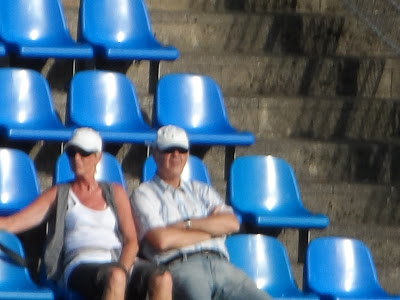 Here you can see the tension in the crowd pre match. 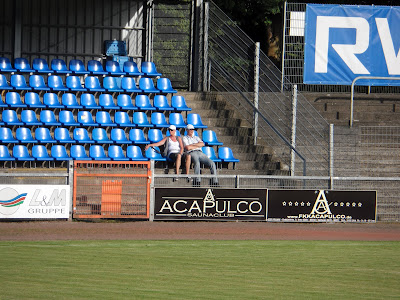 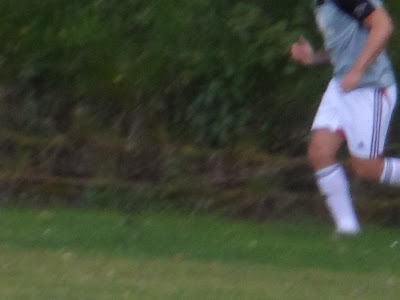 This shot brilliantly captures a man running out of a bush, a classic warm up technique. 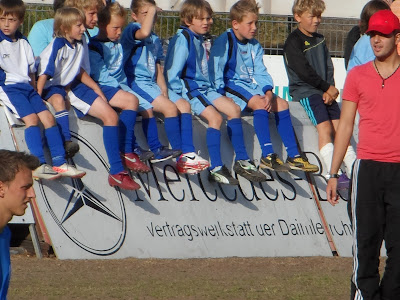 Never work with children or animals. If you must take pictures of children (leave it) always try and cut the tops of the kids heads off on the photos. 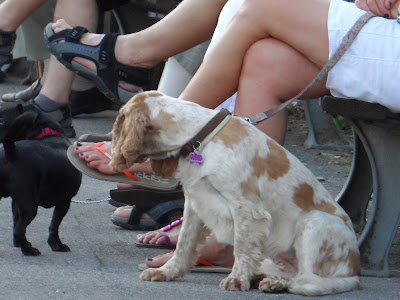 Never work with children or animals. Focus solely on the game. Even if one dog is checking out the arse of the other. 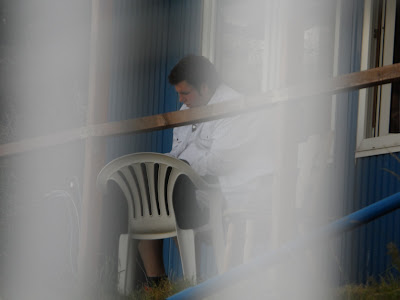 A handy method to improve your photos is to smear two stripes of an almost empty Pritt Stick along the lens. 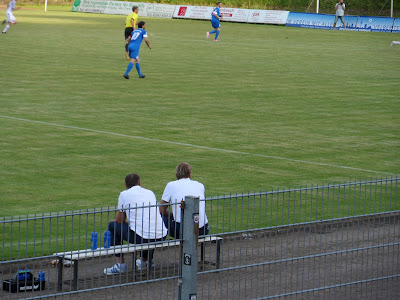 Close up action shots showing both the players and the managers are always likely to capture the readers attention. 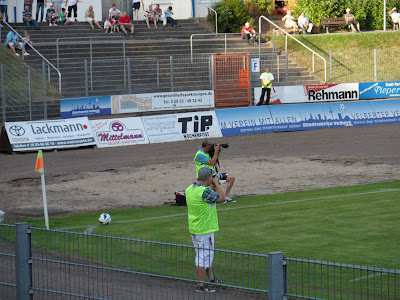 Everyone loves a shot of a corner being taken, as you can tell by my fellow pros poised and ready. But did they get the shot before the player even started to run up to take the ball. Nope. 'Cos they were looking the wrong way that's why! Idiots. 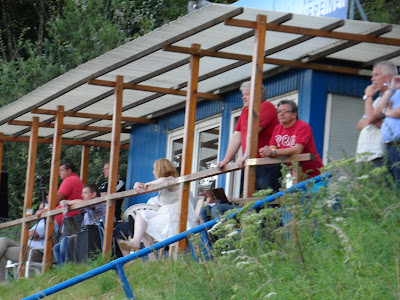 Try to make any interesting aspects of the ground look like they are set at a frankly unstable angle. 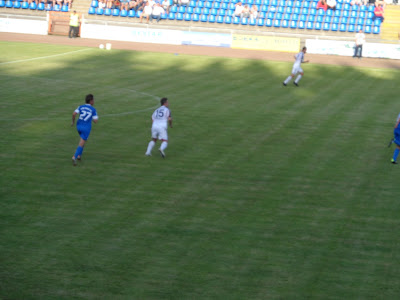 I really can't emphasis the importance of action match shots enough. This one is a perfect example. 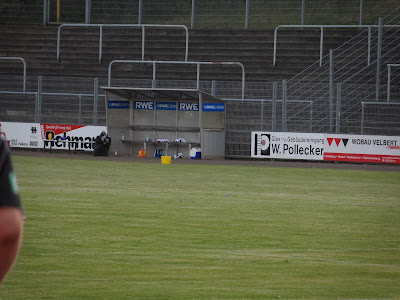 Your readers will want to see pictures of how hard the managers are working to direct their team. If you can't get a shot like that get one with the referee's elbow just in it. 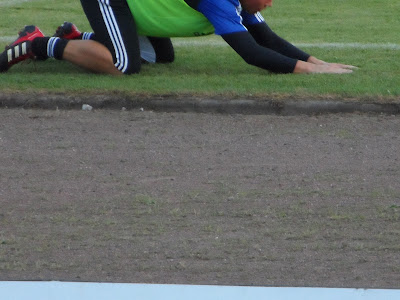 The action off the field can be as important as that on it, for example who doesn't like to see a picture of a sub warming up. 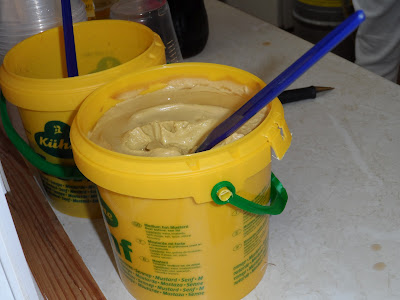 Never make cheap puns. Leave your owners with a picture that will make them as keen as mustard to return to your blog.

And that concludes the AiT blogging masterclass. If you follow this advice one day you too may also somehow get nominated for Best Blog at the NOPA awards. *blows own trumpet* Can I remind you again, and I can not stress this enough, don't drink copious amounts of alcohol if you want to write a thorough match report. Hmm...

For some decent pictures of this match head over to The Ball Is Round's Flickr page here.
Posted by Kenny Legg at 22:31