I'm not saying I can't stand all things green but I fiercely boycott lettuce, detest the Incredible Hulk, campaign extensively for Amazon deforestation and will take a felt tip pen to my first born child's eyes if they're dare to be gr**n. 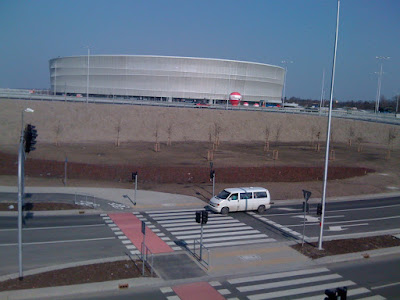 Small. Far away.
Thankfully not every Slask fan is dressed in gr**n. Quite a few are adorned with the red of Wisla Krakow, due to a fan friendship, something which seems utterly bizarre to your average English football fan, but is actually quite common in Europe. 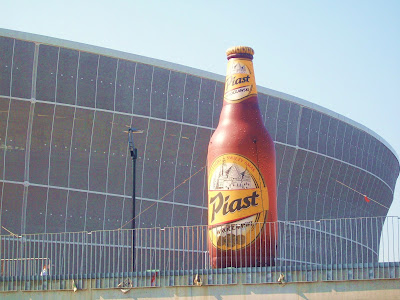 We get Piast and go to football. Tra la la la la la la la la.
Today's opponents are Cracovia, Wisla's hated city rivals, and because of this there's no away fans. There's a fair bit of previous involving the two groups of fans, as shown in this almighty ruck in which all the hooligan numpties followed John Sitton's advice and paired up, brought someone else to help them and brought their fucking dinner. 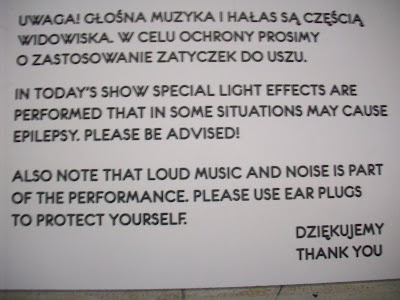 *holds head in hands*
The ground is a "state-of-the-art, multifunctional sports and live entertainment complex with a capacity of over 42 000 seats", which will be used to host three games in Euro 2012. What this actually means is it's all nicely UEFA compliant and is an empty, soulless beast miles from anywhere. On the inside it's all concrete and breeze blocks, Coca Cola and buckets of popcorn and, worst of all, the PA plays family friendly chart pop, like that sodding 'Move Like Jagger' song, an omnipresent aural atrocity that's as welcome in my ears as a Slask Wroclaw fan in Dundee. 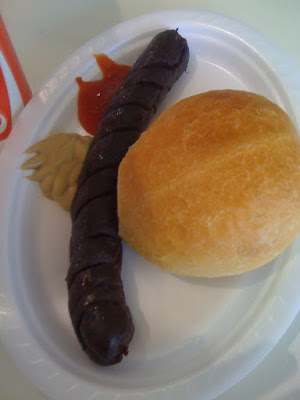 and every bit as tasty as it looks.
The seats are gr**n, every fan is wearing gr**n and it's only the pitch, a scorched yellow, that isn't gr**n. There's one flag behind the goal with no gr**. A large Wisla Krakow flag is draped across the Capo's scaffold stage, from where drums are walloped, choreography dictated and chants led via a radio mic and four massive speakers cranked up to eleven.

The teams come out to a quite muted response, what sounds like a hushed hymn is sung. As the last cadence fades flags are passed backwards, the Capo gives his troops a pre match pep talk and the match kicks off with a passionate chant for....eh, for Wisla Krakow. Odd. Followed by one for Motor Lubin, who have a group of fans here and also share a friendship with Slask. Odder still.

and wave 'em around like you just don't care.
By the time the home fans start chanting for their own team Slask are ahead. A superb move sees Argentinean striker Cristian Diaz fouled by the LKS keeper and score the resulting penalty. After a poor start to this round of fixtures, including a 4-0 loss to fellow title challengers Legia Warsaw, Slask relax and play some superb, quick tempo, football. Cracovia meanwhile are slower than an arthritic slug, as short of ideas as Maroon 5 and could easily have tagged into yesterdays horror show without being in any danger of improving the quality.
As expected the home fans are great, the singing relentless. Some chants have their own rhythmic hand movements, which are enthusiastically followed by everyone behind the goal. As a man who's is delighted to have finally mastered the hand movements to Whigfield's 'Saturday Night' after 17 years spent wrapped in a towel, dancing in front of my bedroom mirror, I was mightily impressed by this. 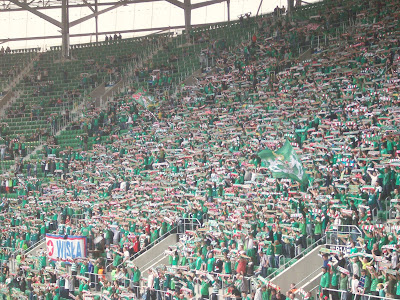 We're all waving scarves now, waving scarves.
Slask score again on 22 minutes, Lukasz Madej weaves through the defence and Sebastian Mila scores with a shot crisper than a multipack of McCoys. Slask really are very good. Damn it you gr**n wearing shitbags. The fans split into two groups and entertain themselves by taking it in turns to intensely chant at each other as their team cruises to victory. Drums rolls build, getting faster and faster before being abruptly silenced and then followed by a huge roar of support. 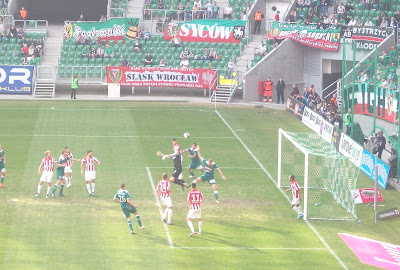 Token match shot.
A team of ultras hustle the crowd for Zloty's to fund their tifo displays; this one from last week being particularly impressive. I emptied my wallet into a tin can in return for a measly sticker, but will soon be entering negotiations for a terrace covering display of Gary Johnson's gargoyle like face, wearing an anguished expression, being viciously bummed by a terra cotta mask wearing sex starved mule. 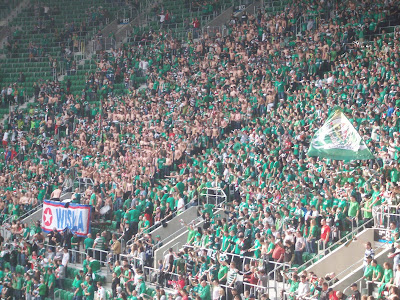 The superb Mila scores again on 45 minutes, in the second half Cracovia improve and Slask continue to impress, but without adding to their tally. The chants continue long after the final whistle, with Milla leading one between the players and fans. One's not enough for the Capo, via his booming sound system he demands the players sit down and start another celebratory chant. Like the football they played it's great to watch and the stadium (almost) lived up to it's billing as, "Wrocław's hallmark and warranty for good entertainment and high level sports emotions" It's just a shame that stadium was only a third full, I guess that's the trade off for a shiny new Euro 2012 approved stadium. 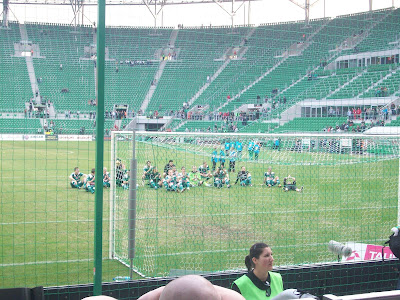 Slack Wroclaw. Get back on your feet.
I liked the fans, the team were superb but gahhh.....can we have a chat about the colour scheme? I really think terra cotta and blue could really work for you. Anyway, call me and let's discuss that Gary Johnson artwork I desperately want to commission.
Previously, on AiT does Poland:
Polonia Warsaw v Korona Kielce
Widzew Lodz v Jagiellonia Bialystok
Gornik Zabrze v LKS Lodz
Posted by Kenny Legg at 13:47