There was one criteria for Saturday's activities - a clubhouse selling cold beer to enjoy whilst topping up my tan in tinpot surroundings.

Cheltenham Saracens clubhouse looked to do the job nicely. Skittles alley, darts board, big screen TV and no doubt a wealth of tinpottery waiting to discovered. Well, I'm sure it was but it was sadly situated the wrong side of a massive chain and padlock...a mile and a half from the ground! #fail #facepalm #epicfail #epicfacepalm #epicnosebleed 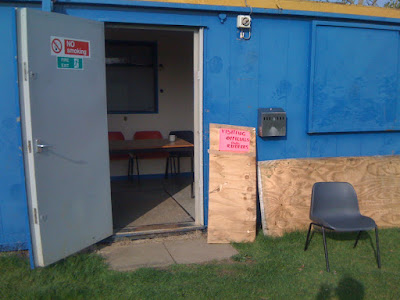 Bucket chairs in ground - tick. What does that sign say?
The ground itself is found by walking over a railway bridge, past the block of council flats, turn left at the burnt out armchair, straight on at the discarded flan (really!), down the muddy path and pay your money to the man, with the carrier bag, perched on the wall. Toilets are on your left should you wish mop your sweaty brow. Mind the pair of welly boots in the middle of the floor as you go in.

Saracens were full of optimism for the match after making it through to the quarter finals of the, superbly craply named, Supplementary Cup in midweek. Manager Gerry Oldham stating that, "we've got a youthful bunch and we have legs in our side". A side with 22 legs always seems to work quite well for most sides I find Gerry. 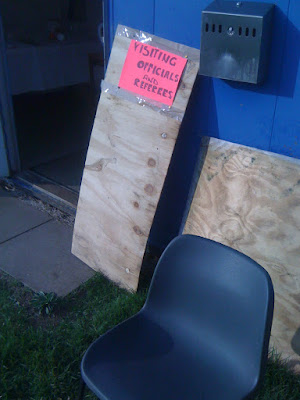 Ah! There's nothing more welcoming than a hastily scribbled on luminous piece of paper.
A club tie wearing official sits proudly on a bench outside the storage/toilet building thing. Whatever it is, it's not a clubhouse selling an extensive range of alcoholic beverages. Thankfully though, my God thankfully, the door marked "Storage" hosts a fridge containing a range of magical frosty beverages at a bargain £1.50 a can. That range being Fosters and Carling. Beggars. Choosers. 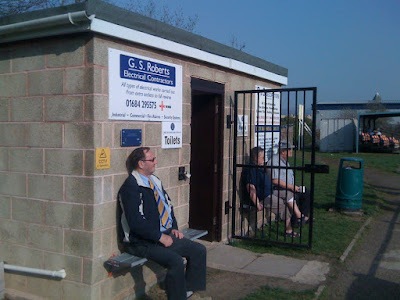 Great posture. Arms straight, hands on hips, head back, feet out in front of you.
The match um....takes time to settle down. The pitch is bobblier than a frosty Nobbly Bobbly eaten by this man. Saracens have made an effort to keep the goalmouth flat, eschewing usual protocol that sees team photos taken in the centre of the goal, favouring the lesser seen approach of cramming everyone over to the left side. 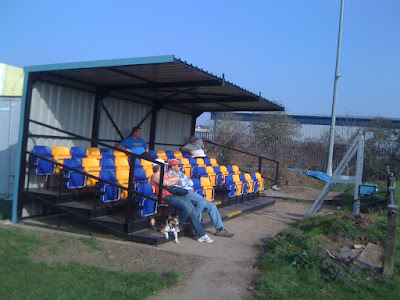 The new stand. From right to left; human, human, human, human, bum sniffer.
The ground consists of two, pretty identical, stands which even have a similarly small number of punters sat in them. There's a terrace area, which is a superb mix of scaffolding and rusty corrugated iron and is practically impossible to reach, unless you cut across the pitch and sneak behind the dugouts - where a sub is probably having a sneaky piss anyway. 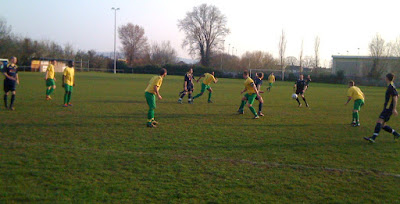 Token match shot.
Bladders empty the home subs take to the sidelines to warm up, re-interpreting "warm up" to mean 'stand in the sun with your shirt off and chat to your mates'. Home fans purchase tea in mugs, away officials locate the beer stash and a couple of dogs take it in turn to sniff each other's anus'. Good old non league football hey. On the pitch there's a fair bit of metaphorical arse sniffing going on as both teams get to know each other without making a decisive move. 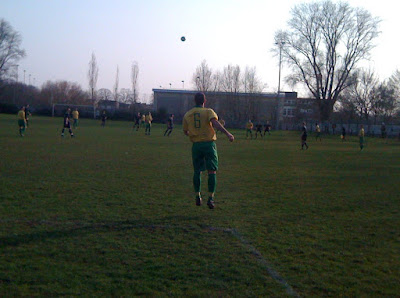 Outfield player taking goal kicks - yes! *punches air*
After a 5 minute period where both teams punt it to each other the home keeper is left to bemoan the, "fucking long ball again" as Abingdon's Piers McGlynn’s gets on the end of a long hoof, catches the ball full on the bobble and shins it in. Shortly after Saracens equalise. I didn't see the goal. I was trying to sneak a photo of a dog drinking some water from a bowl.

Half time equals more refreshments. More water for the dog, Fosters for me. Different drinks for different needs. One person not getting refreshed is a kid, aged about seven, who cycled into the match just before half time. His protestations for a cold beverage to be procured for him by his equally young, scooter riding, female companion met with a fierce retort of, "I'm not getting you a drink you bastard". Cripes! 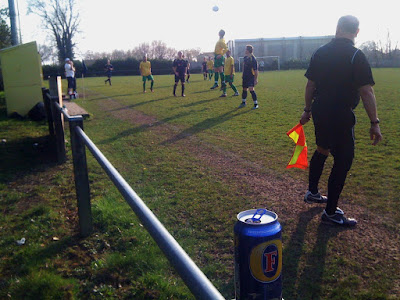 This type of photo, with a beer in the foreground and the action in the background, is known in the trade as the 'Stuart Fuller'.
The Abingdon keeper begs their fans for a frosty Fosters, the home team captain wheezes back on the pitch stating he's, "too old for this" and a dogs nose is separated from another dogs bunghole. Play improves in the second half, but there's still the sad demise of two balls which are booted onto the railway line adjacent to the pitch. As there's about 35 people in this ground, and those balls are expensive, whoever booted it over should be made to bloody well go and fetch it while the match continues without them.

The Abingdon keeper offers polite encouragement to his team mates, "can we pick up?", "can we squeeze?" It works, Adam Lovegrove scores a spiffing goal midway through the half. Abingdon stubbornly protect the lead, the mild mannered keeper politely influences the ref, "can we start seeing these handball's?" How very Oxfordshire of him. What'o! 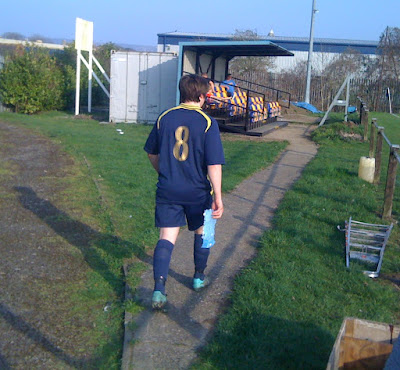 Ice cubes?! It's no time for a cocktai.....oh yeah, you went off injured. Probably for that then.
The entertaining game concludes, shortly after Lovegrove gets his second, and players, officials and fans later gather in the clubhou....oh. Still, the Saracens town centre clubhouse must be doing something right if they can run 16 football teams, a cricket team, a rugby team, a darts team and a skittles team (of course a skittles team). I'll raise a Fosters towards them and doff of the AiT bobble hat in their direction.
Posted by Kenny Legg at 16:02