Heaven Is A Place On A Roof


Blau Weiss Friedrichshain play in the Kreisliga C, the lowest level of the Berlin league system, but on (get this irony fans - someone get Alanis Morissette on the phone) the highest pitch in Berlin. A pitch on the roof (THE ROOF!) of a Cash and Carry (A CASH AND CARRY!) Mmmm, now that’s good tinpot. 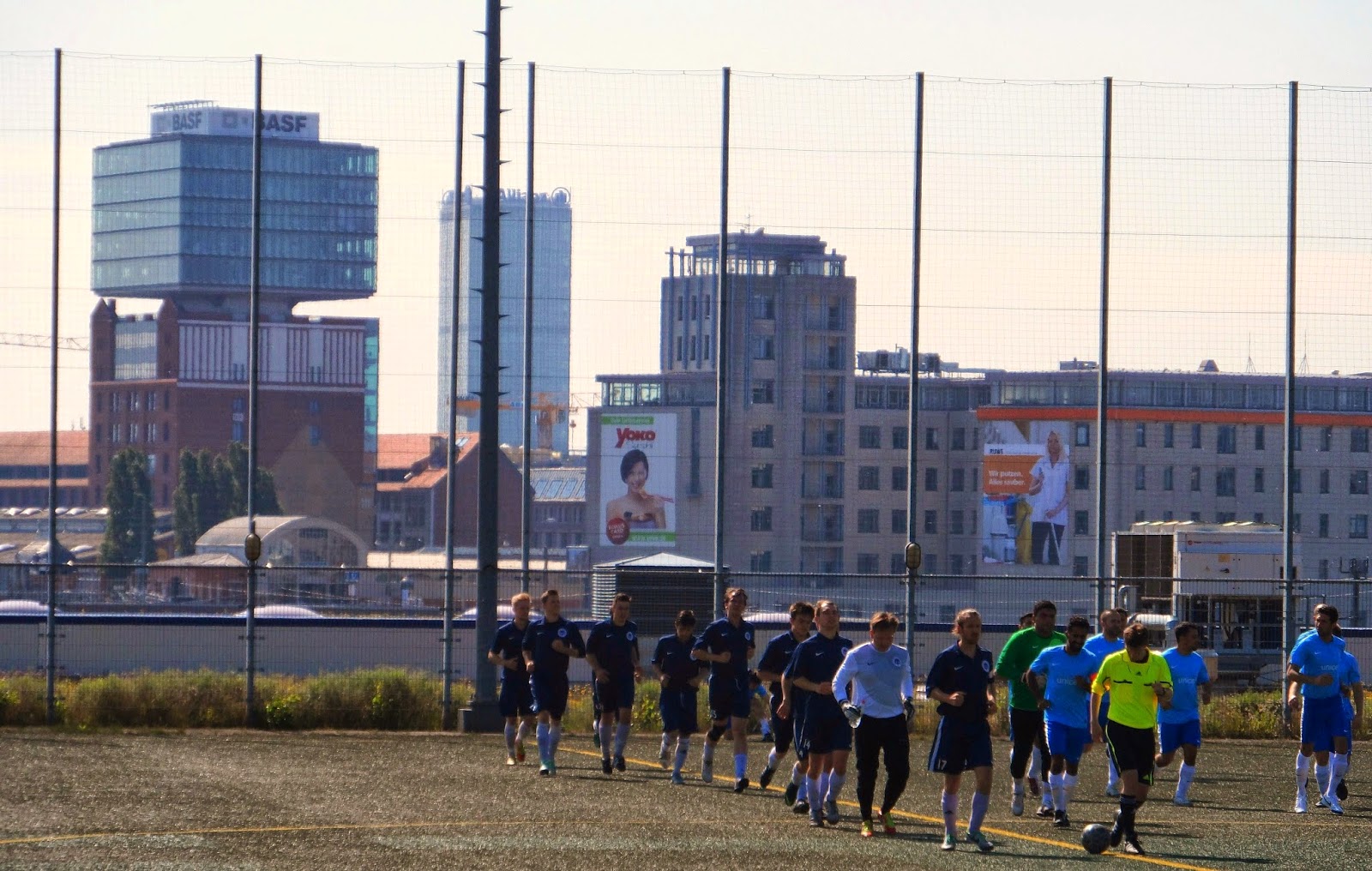 The stadium, which is a whole 12m off the ground (ok- we’re not talking breathing difficulties during World Cup Qualifiers in La Paz here), is tremendously called “Football Heaven” and yes, there is a stairway to Football Heaven. It has a 300 capacity, main stand on wheels and spectacular views over legendary all night disco party Berghain, the East Side Gallery the O2 World and the TV Tower.  It also has the type of Astroturf that would ruin your legs if went for a sliding tackle. It’d give you one of them nasty burns. One of them that rub away against your trousers for fucking ages.

Prior to this season Blau Weiss Friedrichshain were playing in Berlin’s “Freetime” league. During their first season in real tinpot they stand on the brink, some say cusp, of promotion if they could manage to avoid defeat against FC Kreuzberg II (Part Deux). 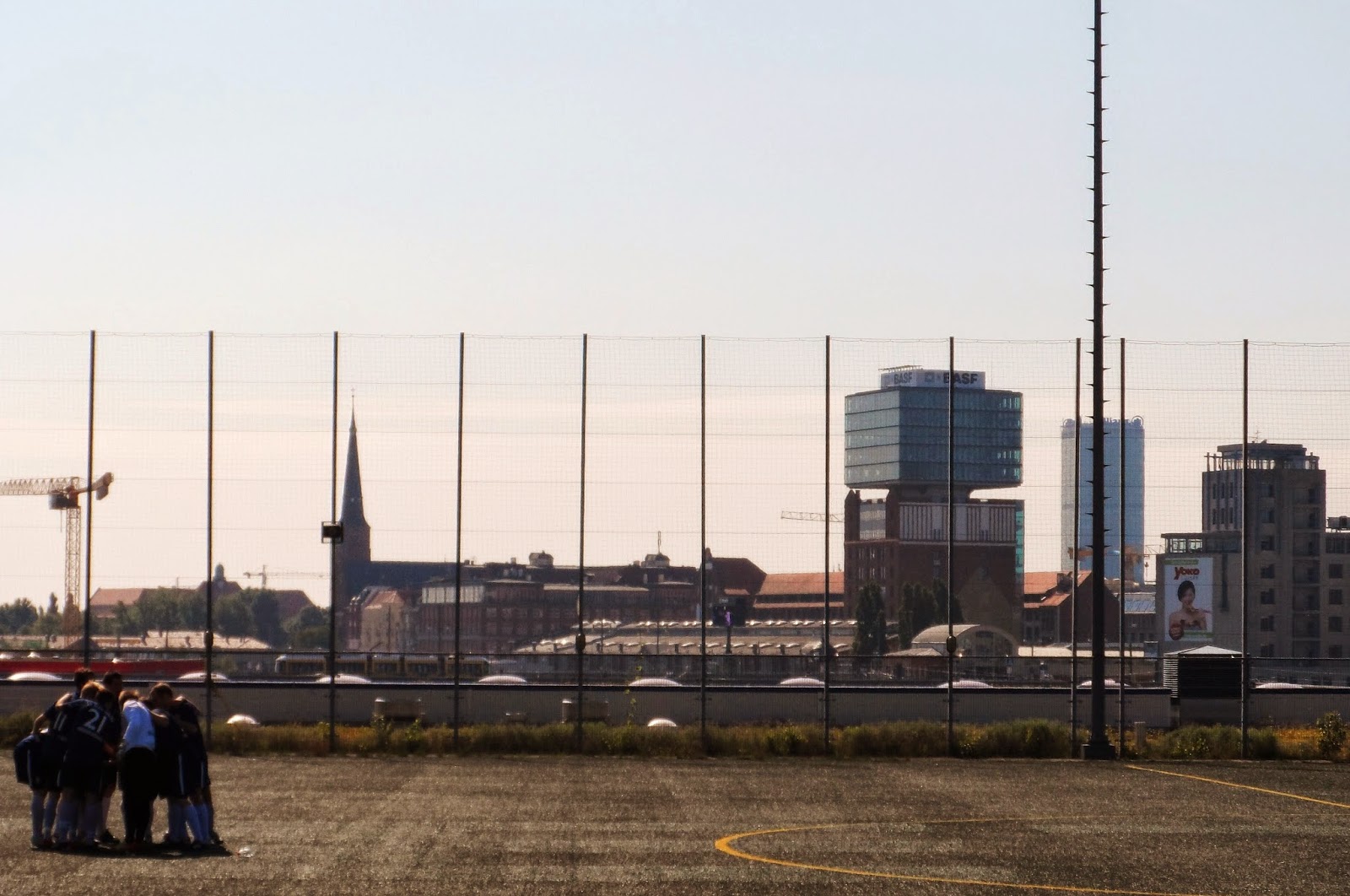 Kick off was at the lie in ruining time of 10am. Prior to kick off excited young Friedrichshain players enthusiastically go through pre prepared warm up routines. At the other end of the roof overweight Turks amble around, occasionally hoofing a ball, or stretching against the fence. Dolly Parton, Bryan Adams and Lily Allen loom large over the pitch, their pixelated faces flickering on the big screen dangled on the wall of the 02 World. 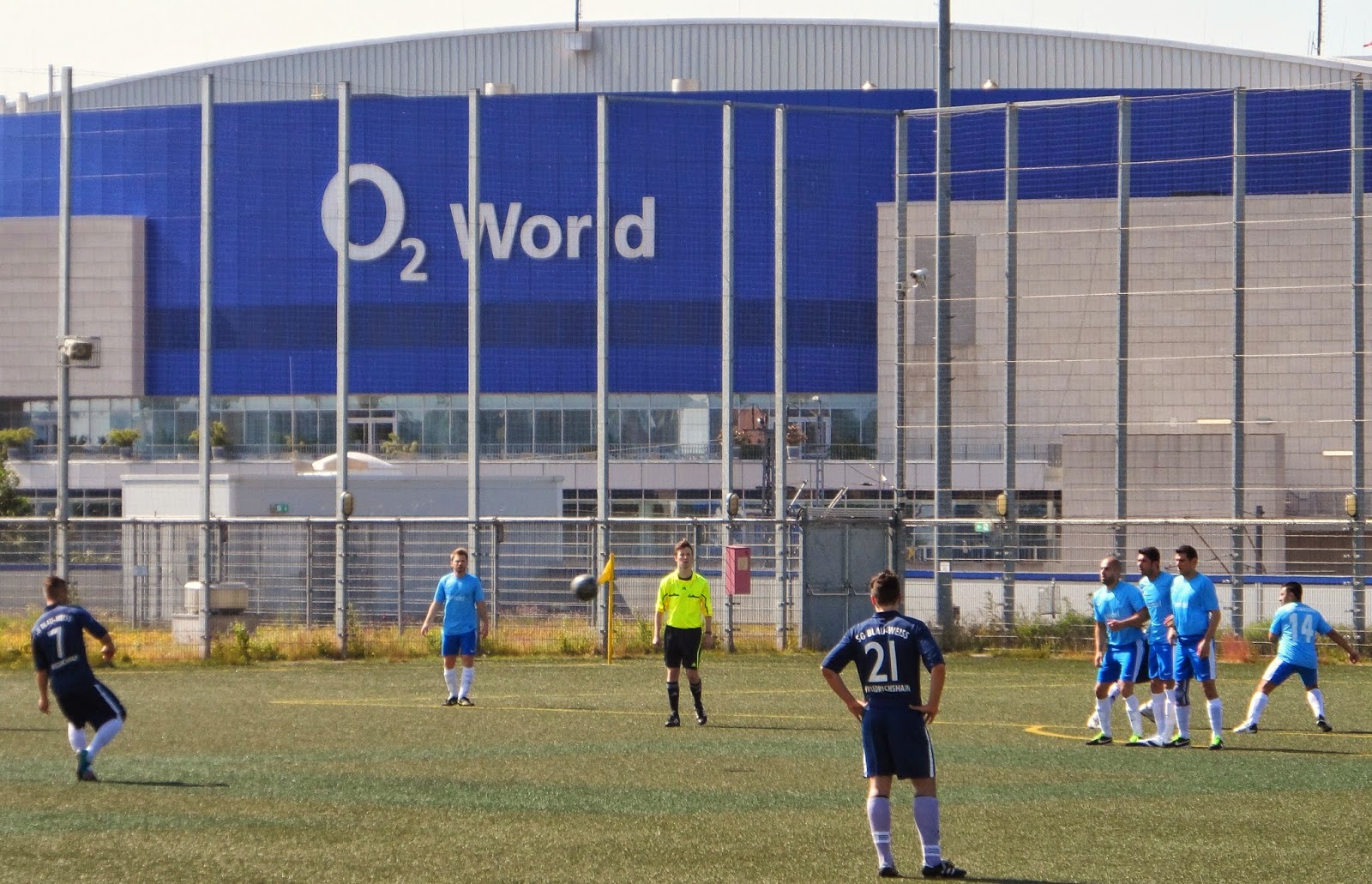 The Blau Weiss Friedrichshain website demanded that the fans bring “something that is blue and white, a whistle, a rattle or a flare”. As it turned out the only thing anyone brought with them was a packed breakfast. Nothing, absolutely NOTHING, messes with a Germans right to a leisurely weekend breakfast. At kick off no whistles are blown, no rattles are twirled or flares lit; instead the only noise comes from the rustling of paper bags full bread rolls, the tearing open of packets of salami and the pop of plastic lids covering cheese spreads being removed. 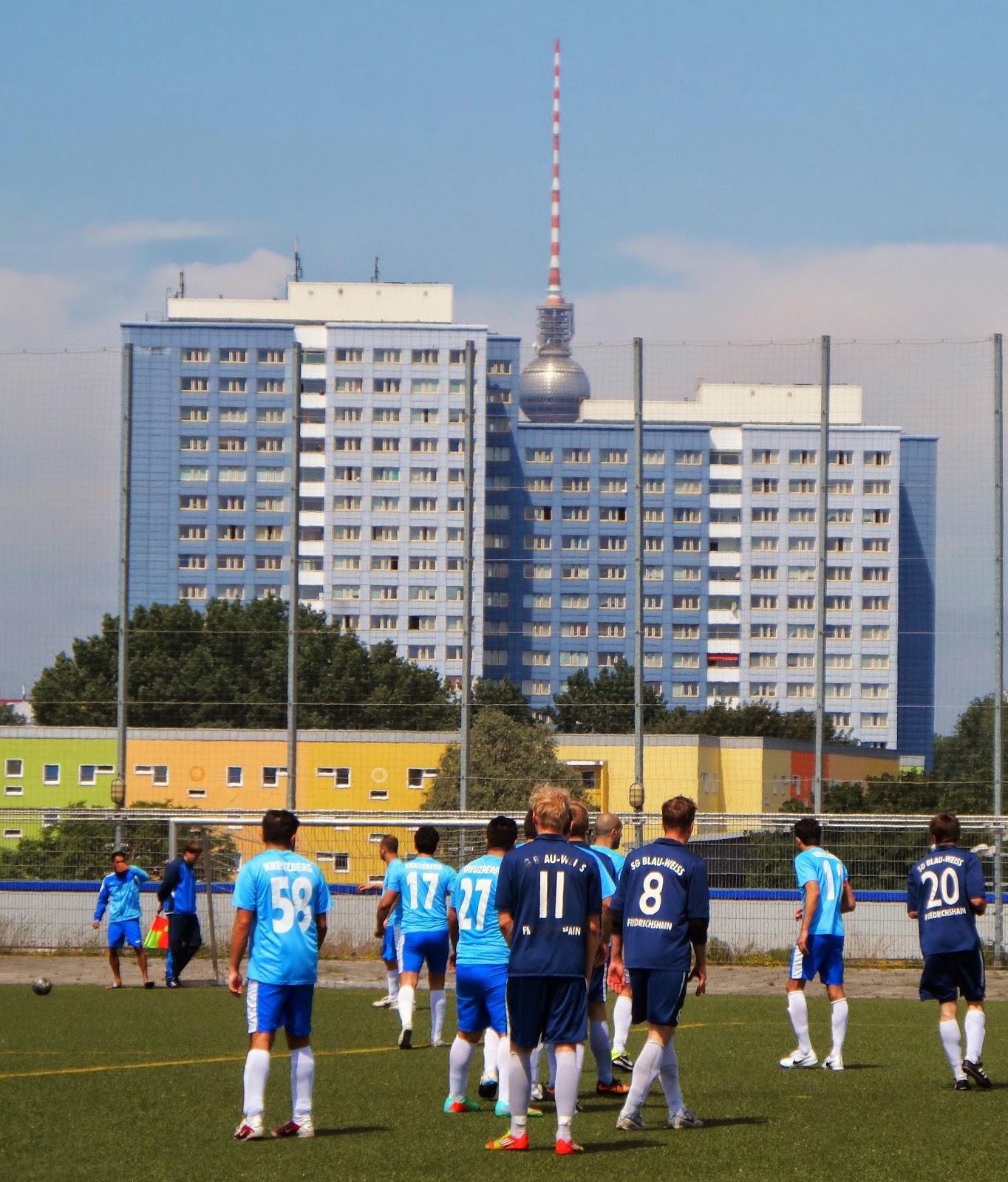 In the time it takes a German to slap some cheese and salami on a bread roll a long punt down field leaves a surprised, and yawning, FC Kreuzberg II ("Just When You Thought It Was Safe To Go Back In The Water”) striker through on goal. With a clear view of the whites of the keepers eyes, or in the bedroom windows of the 5th floor flats behind the pitch, he shuffles through on goal. One scuffed shot later and FC Kreuzberg II (The Smell of Fear) are ahead. Bread rolls are angrily chomped. My stomach rumbles. Even at 10:02am it’s berluddy hot, I could definitely have fried an egg on one of the seats. 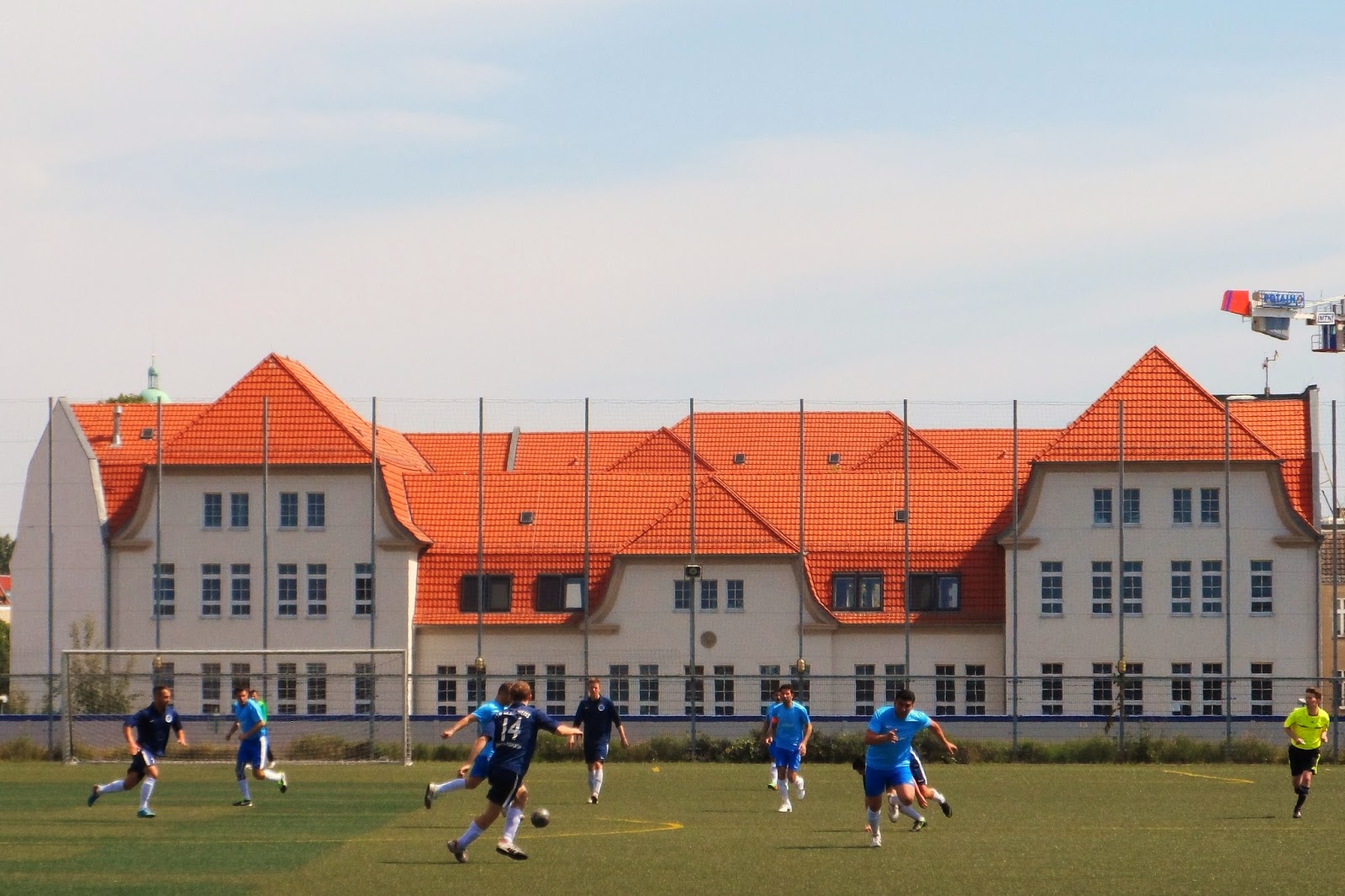 
FC Kreuzberg II (The Story Continues) are two nil ahead before breakfast has even reached the third serving of bread rolls. 12 minutes later and breakfast has now moved on to the fruit course and, more importantly given the vague notion of this being a football blog, Blau Weiss score a goal. The tremendously teutonically titled Fritz Fischer fires a shot across the roof that would have reached from the bakery section to the frozen pizza aisle of your standard Asda Wal-Mart supermarket. 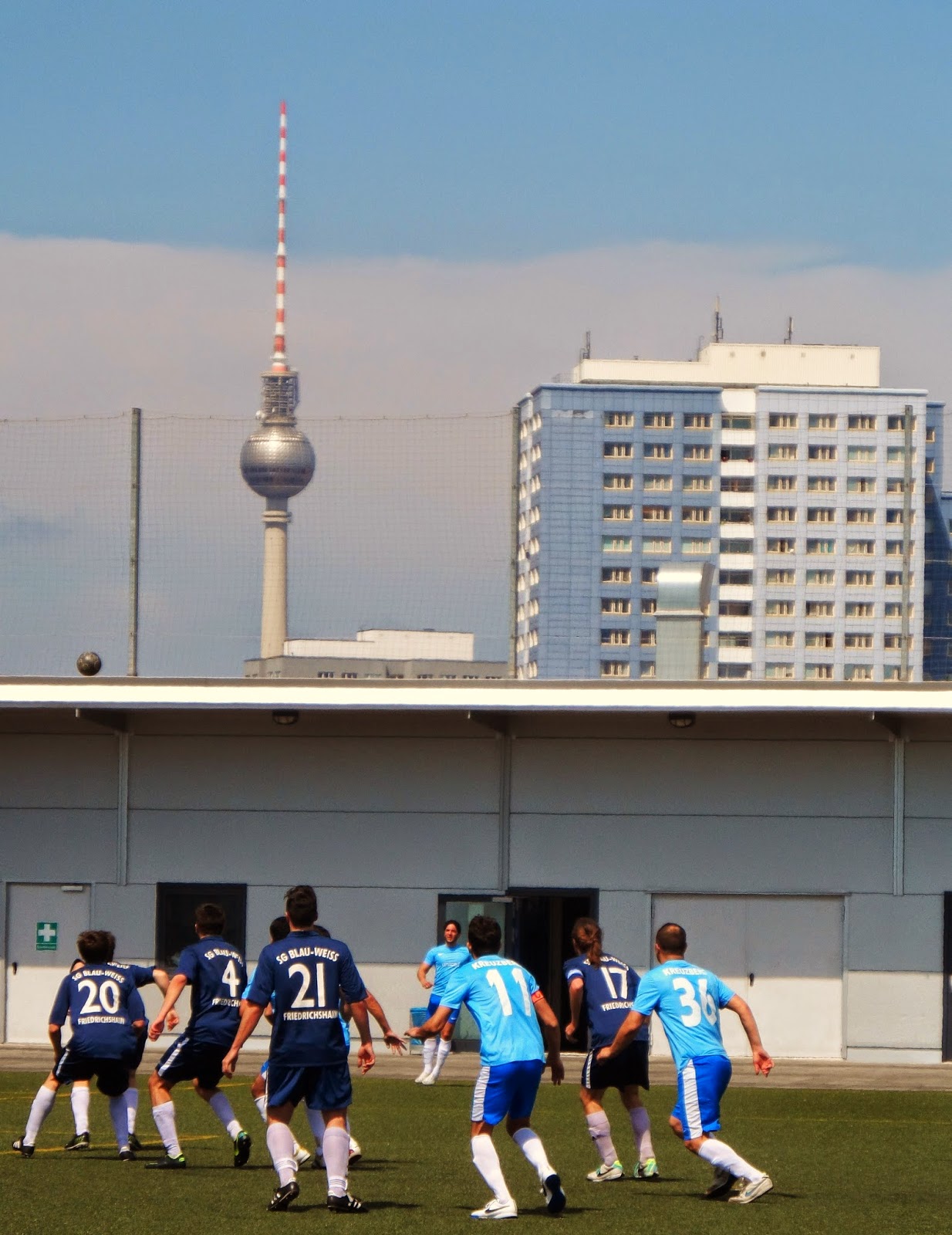 The second half sees FC Kreuzberg II (and the Temple of Doom) battle to thwart BW Friedrichshain. Tempers, and layers of skin covering the knee caps, get frayed. Shouts of “we've got to work on Monday” and “you know how the pitch burns” accompany threats of physical violence. Unfit (but fitter than me)  men battle to contain energetic young ‘uns with a defensive system that consists of hoofing the ball as far as possible and an attacking strategy that focuses on shooting from miles out, because running towards goal just isn’t an option anymore. Somehow it works and, with breakfast drawing to a close, and discussions about lunch options beginning, the players of FC Kreuzberg II (The Legend Continues) fall to Heaven’s floor victorious and exhausted.
Posted by Kenny Legg at 11:16