The Stadion an der Bremer Brücke  is squeezed into a residential area, where it’s been for 82 (eighty two) years. The turnstiles are non fat person compliant, built when people were less well built, and topped by barbed wire. The home terrace is fire safety certificate deifyingly narrow, the roof leaks, the terraces are packed, the  terraces are covered in spilt beer and dropped Bratwurst. It smells of piss. 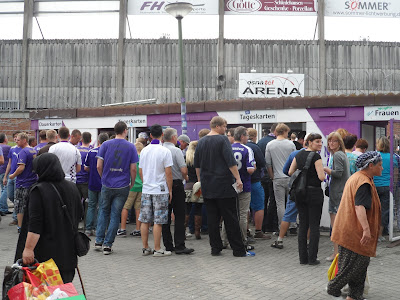 Shortly before this photo was taken those two old women high fived each other and then walked their separate ways. 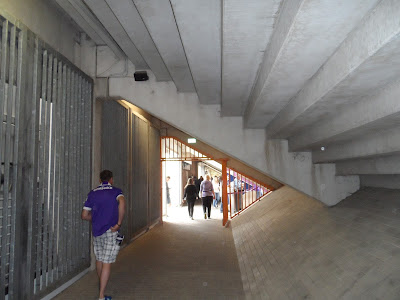 Jeez, it's a bit tight. *puts down bratwurst, loses appetite*

The fans sung the obligatory awful song praising the town. They all have one, German fans love it. “Osnabrück, you cool pig, you have everything I need, and a swimming pool too.” A swimming pool.....Wooo....Knock it off Osnabrück hey, you'll make the rest of us feel insignificant about where we live. 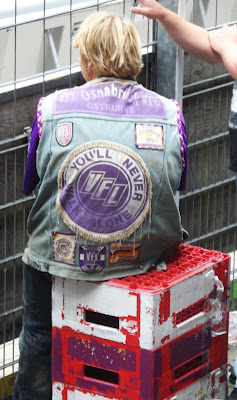 The fans sing “You’ll Never Walk Alone”. They all do, Germans love it. W’s pronounced like v’s and scarves aloft or, if you are your friend have both embarrassingly forgot your purple Osnabrück scarf, simply hold up a black hoody. No one will notice. No one will notice except the roving, non forgiving eye of AiT that is. Fools. 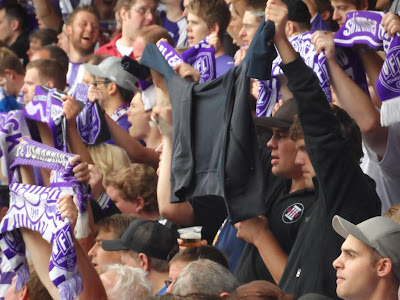 Have a word with yourselves hey lads.

The Osna fans made some noise, co-ordinated by a drum about as audible as my first drum kit, (upturned frying pan on the kitchen floor circa 1984. Still get it out every now and then. Terrible reverb), and a couple of enthusiastic fellas on upturned beer crates. 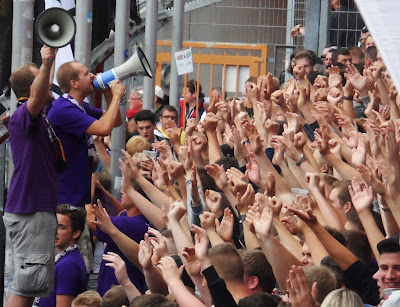 Down the Hansa end it was all kicking off, coordinated by a shouty man with a megaphone dangling on a fence, it looked tremendous. I'm a bastard for a shouty man with a megaphone. Every single fan follows the orders. Scarves up, scarves left, scarves right, twirl scarves, shout loud, sit down, separate into two groups and then run at each other like a moshpit. Yep, run at each other and shove each other about. Brilliant. 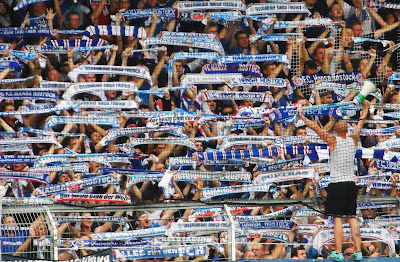 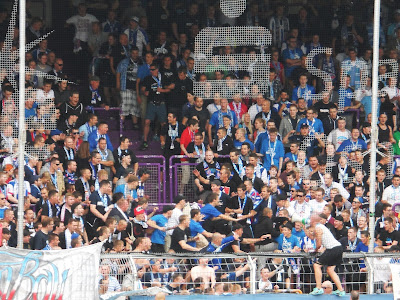 Half time, (Osnabrück were winning one nil seeing you ask) sees a fat TV producer waddle over the touchline, risking long term spinal deforming injury, and dumping a desk for his slick TV presenting colleague to waffle on behind. The goalmouths were blocked up with adverts. The centre circle covered in a huge advert. Large areas of the pesky grass area were covered in giant advertising boards, hauled out by children whose spines are likely still to be forming and quite frankly shouldn’t be dragging, what I estimate, was quite a heavy piece of xxx. As such I will now be boycotting Bauxpert Seelmeyer. Someone has to think of the children. 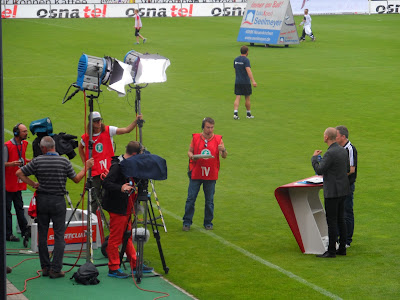 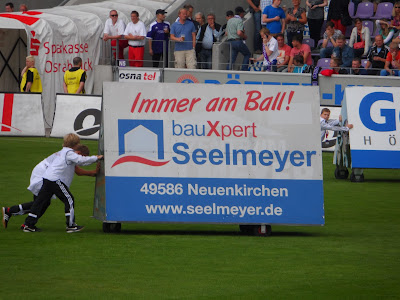 I think I just heard my spine crumble.

There was then “half time entertainment” which falls thudding into the category marked “so shit it’s begrudgingly good”. Two lumbering, old enough to know better, adults were made to run across the pitch carrying an inflatable keg (one thumb up for the word keg, one thumb down for preceding word “inflatable”), down a pint of beer (double thumbs up) and then back across the pitch. The winner then received 30 (thirty) litres of the local beer (double thumbs up). 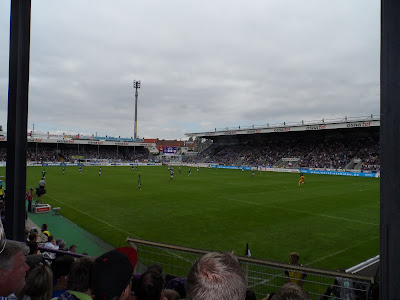 Token match shot. Only shot not of Hansa fans apparently.
It was then down to the goalmouth where the “fun” continued. An oversized coffee cup (possibly an inflatable, possibly filled with some sort of foam – didn’t investigate) representing the main sponsors of Osnabrück, Coffee Perfect, was placed on the cross bar. Uncoordinated locals, lacking in any type of football skills, were then invited to try and kick the coffee cup off the bar using only a football in a game called, “Kick the Latte off the cross bar”. Catchy. But wait. In a hilarious German play on words it’s called “Schiess die Latte von der Latte.” I’ll explain. The German for la-di-da frothy coffee Latte is Latte. The German for crossbar is Latte. The coffee cup, the cross bar both called Latte. What larks. My sides. Germany. Ouch.

As this chaos ensues an old man calmly forks divots back into the turf. 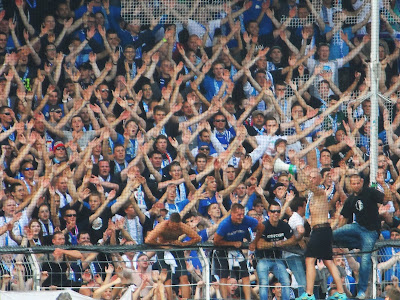 Further AiT investigations showed that there was actually another drum in the Osnabrück end. A drum which resembled my second drum kit (upturned wok, still duet with Old Father Tinpot on the cheese grater and wooden spoon every now and then) and made a noise louder than the time we got Mother Tinpot's Soup Cauldron out for a tub-thumping. The clang of the Osnabrueck drum was amplified under the narrow terrace, trapped in the gangway until the soundwaves crashed into my latest beverage sending it sloshing all down my jeans. Gah. Wouldn't happen in a nice, acoustic damping, modern stadium.

The Hansa fans don't stop. There team get on top and get a late winner which sees flares and smoke bombs set off which was roundly condemned by everyone here at AiT. (chinny reckon) 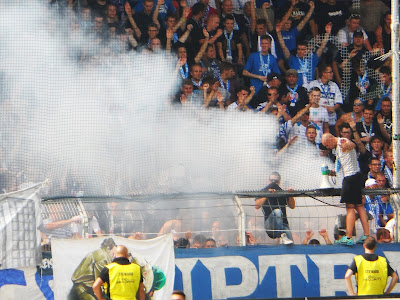 Down (up!) with this sort of thing.

There seems to be something special about the support from east Germany, they sing louder and louder, live each moment and have real passion for their club. (Although this fella, of course called Knut, should be looking for a refund from his tattooist) The Dynamo Dresden fans are still number one on the imaginary chart of Best Fans Seen By AiT. Clearly I'm not the man to draw some intelligent conclusions on the relationships between football fans and there relative socio-economic situation, after all I've just admitted to nightly kitchen based drum set solos but there might just be something in my half baked theory. 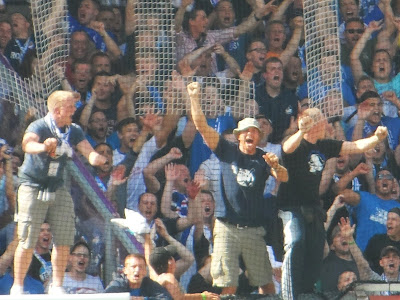